One of the two rail lines over the Blue Mountains is closed following yesterday’s derailment which has damaged 10km of track. Photo: Transport for NSW

A DERAILMENT on the Blue Mountains line west of Sydney is expected to disrupt the flow of containers into Sydney’s Port Botany for the rest of this month, sources have told Grain Central.

Containers from the region can still get to NSW’s major container port via northern and southern routes.

A Transport for NSW spokesperson confirmed the incident occurred at around 5am yesterday.

“On Wednesday morning a freight train derailment caused significant damage to track infrastructure between Lawson and Linden on the Blue Mountain Line,” the spokesperson said.

“Following inspections by engineers, there is confirmed damage along a 10-kilometre section of track that will require infrastructure repairs along the line. 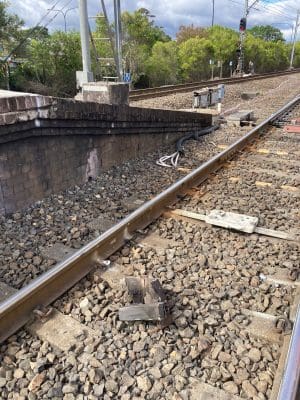 Part of a bogie damaged during yesterday’s derailment on the Blue Mountains line. Photo: Transport for NSW

“An exact timeframe on the repairs and the associated impacts are being worked through.

“Transport for NSW will continue to provide regular updates to the rail freight industry on progress of the repairs.”

No-one was injured in the incident, but damage to the track has disrupted passenger services, and these are being replaced by buses operating between Katoomba and Springwood.

Logistics provider Qube Holdings Ltd has confirmed it was operating the train involved, and that it was travelling from Warren in the Macquarie Valley to Port Botany.

A Qube spokesperson said the cause of the derailment was under investigation.

“Qube is working closely with Sydney Trains and other relevant agencies on the investigation and to ensure services can be restored as soon as possible,” the spokesperson said.

A source has told Grain Central the damage is unlikely to be fixed before the end of the month, but that the dual line will allow some rail freight to get through, possibly for 12 hours a day, with closure for the other 12 hours to allow repairs to be carried out safely.