WESTERN Australia-based CBH Group has announced its largest ever annual surplus or net profit after tax of $497.7 million for the year ending September 30.

CBH Group said the financial successes were underpinned by a record harvest, strong shipping demand and dramatic shifts in market fundamentals as a result of the Ukraine conflict.

CBH CEO Ben Macnamara said it was a year driven by an unprecedented set of events, including the COVID-19 pandemic, global supply chain disruptions, the Ukraine conflict, and domestic labour shortages. 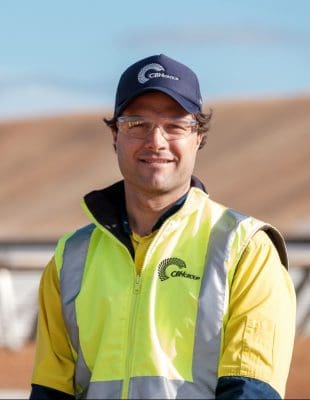 “Over the past year, the CBH team has shown their resilience and achieved new records, resulting in a really strong end of year result,” Mr Macnamara said.

“For the first time in our co-op’s history, the record 2021/22 receivals of 21.3 million tonnes (Mt) exceeded the logistical capacity of the network, with the size of the crop 50 per cent bigger than the five-year average.

“Unsurprisingly, the record harvest placed pressure on the supply chain, but our people worked together to overcome all the challenges thrown at them to receive, store and outturn the crop, while also delivering the largest network investment program on record, and navigating through significant global market volatility.

“The record 18.1Mt that the team delivered to our international and domestic customers is testament to the resilience of the network and should put to bed any commentary that the supply chain is broken.

“While we were able to mitigate some of the significant pressure throughout the year, it highlights the need to continue our increased investment in the network so we can improve our logistical capacity, particularly with moving grain from upcountry sites to port.”

The key driver for the Group surplus was the Marketing and Trading division, which reported a surplus of $437.9M.

The division accumulated 50 per cent of the record WA crop and paid a record $5 billion to WA growers during the year.

“The Marketing and Trading division experienced a significant increase in export margins due to the Ukraine conflict, which started after the division had largely completed its accumulation program,” Mr Macnamara said.

“Market fundamentals shifted dramatically after the start of the conflict, and this significantly increased the international value of grain far beyond anyone’s expectations.”

Marketing and Trading will retain 62pc of its surplus to bolster the division’s equity position, which will be necessary to fund the purchase of the current and forecast larger crops, manage market risk and offer higher prices for growers.

The remaining 38pc, or $168M, will be reinvested in the network in line with the CBH strategy, which was refreshed during the year.

“The 2021/22 harvest smashed dozens of records, including outstripping the five-year crop average by 50 per cent, and growers delivering their grain to CBH sites quicker than ever,” Mr Macnamara said.

While the team safely received the record harvest, the size of the crop challenged the outloading program, which was compounded by disruptions from COVID-19 related absenteeism and labour shortages, including truck and train driver availability.

“Despite these challenges, the team came together along with existing and new contractors and growers, to collectively export 16.7 million tonnes and deliver 1.4 million tonnes to domestic customers.” “We also started supplying fertiliser from Esperance this year and we are set to start supply from our purpose-built Kwinana facility in early 2023.

“This expansion opens the door for more WA growers to directly benefit from access to secure supply and competitive pricing as we continue to grow our fertiliser business.”

This year CBH invested a record $348M to improve the network, including completing three site expansion projects, more than 230 sustaining capital projects, a large maintenance program and preparation for another massive 2022-23 harvest.

“We currently have a once-in-a-lifetime opportunity to strengthen and reinvest in the co-operative – it is that type of forward-looking vision that allowed the co-operative to deliver major projects such as the Kwinana Grain Terminal in the 1970s, which are still delivering value growers today,” Mr Macnamara said.

“Strengthening the network is a long-term investment – an opportunity to set us up for success in the coming years as the crop size continues to grow.

“While we have invested significantly in the network over the past five years, we are committed to investing a further $4B over the next decade, which is crucial to increase the capacity of the network and deliver sustainable, long-term value for Western Australian growers.”

Looking ahead, Mr Macnamara said CBH was focused on delivering on the ‘Path to 2033’ Strategy, which aims to lift the supply chain’s logistical and export capacity.

“Right now, we are working to hit the first target of being able to export 2Mt each month by 2024, and then progressively lift this to 2.5Mt then 3Mt per month by 2033, or sooner.

“We are making good progress on this, with a number of projects underway including the acquisition of more locomotives and wagons, construction of rapid rail outloading facilities, and working on the re-establishment of the Avon rail transfer facility.

“Our immediate focus is safely receiving the remainder of this year’s harvest, with a large amount of preparation put into receiving a massive crop that is currently looking like it might beat last year’s record.”