CBH pulls out all stops to ship record crop WA is shipping a record amount of grain out of its five bulk terminals, including CBH Albany. Photo: Southern Ports

WHILE early seeding is currently under way in parts of Western Australia’s Wheatbelt, CBH Group is working hard to move the record 2021-22 harvest, with bulk exports taking precedent over containers.

According to ABARES WA’s 2021-22 winter crop production reached 23.1 million tonnes (Mt), and the vast majority of it will be exported.

Alongside working to open additional shipping slots, CBH has also announced it will be prioritising bulk exports.

A CBH Group spokesperson said resources will be moved from container-packing into bulk.

“This year CBH has a significant task ahead to export the record harvest, with 17.74Mt of shipping capacity from the CBH system fully booked by exporters of WA grain,” the spokesperson said.

“For CBH to meet this task, we are looking to prioritise our resources around the bulk export supply chain to maintain and enhance efficiencies where possible.

“With this in mind, we are temporarily redirecting resources currently reserved to supply container packing stock bulk exports at the Kwinana Grain Terminal.”

They said this will mean all spare container shipping slots will be removed until spring.

“As a result, any remaining spare container capacity from the end of May onwards will be removed for the remainder of the shipping year until 30 September 2022.

This development doesn’t come as a surprise to Independent Grain Handlers, Rob Proud, who said the demand for containers makes them too valuable to pack with grain exports, making bulk an attractive option for handlers.

He said the biggest exports out of WA in containers at the moment is “thin air”.

“People are paying a lot of money to have empty containers straight out of Australian ports back to their origins,” Mr Proud said.

“They don’t want it sitting in WA for ten to 21 days while it does through quarantine and gets re-packed and re-sent out and spends another ten days getting to the destination and getting unpacked.”

WA Farmers grains president Mic Fels praised the work of CBH to move the record crop and their efforts to work with growers to keep the supply chains moving.

“I met recently with CBH and they updated us on how they are going getting more grain exported within the window,” Mr Fels said.

“They are achieving more than they set out to do this is year which is a result of a lot of the initiatives that we have been working directly with CBH to implement.

Mr Fels said it was an imperative that the crop moved to port and overseas as early as possible to maximise on the high commodity prices.

“We were desperately pressing CBH to be able to move the crop early because of the huge prices globally and to their credit that is exactly what they are doing.

“We would love all these crops to be shifted before harvest into this record world market, but I think what they are achieving at this point is great.”

In order to haul the crop within these tight timeframes, CBH announced it recruited about 2000 harvest casuals as well as putting the call out to farmers who had available trucking capacity to move the record crop to CBH sites. 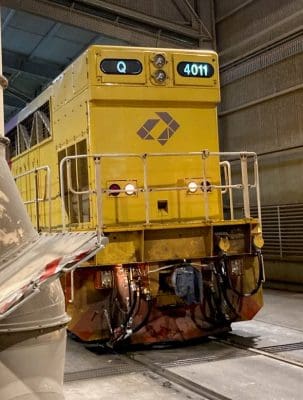 Aurizon is hauling grain from Grass Patch to Esperance to help CBH move a record crop to port. Photo: Aurizon

In a comment on social media, CBH confirmed that these extra trains resulted in grain being loaded from Grass Patch to the Esperance terminal in recent weeks.

An Aurizon spokesperson said the trains were sourced from Aurizon’s existing fleet.

“The additional trains are being deployed to best meet grower demand and maximise throughput on the rail network, and effectively result in a 30pc uplift in rail capacity for growers when we add them to the existing 10 CBH-owned fleets,” the spokesperson said.

“It also means that the Esperance zone is again served by rail.”

The spokesperson said Aurizon was also working on upgrading the current network to ensure it is reliable and efficient moving forward.

“Aurizon has been working hard to unlock capability from within our broader operations.

“Aurizon is putting extra resources and focusing heavily on rollingstock maintenance services, to deliver the higher levels of safety, reliability and performance that we would expect from CBH’s investment in its large loco and wagon fleet.

“Dedicated investments are also being made at Avon bringing the large rail maintenance facility and yards back into operation.

“There are also upgrades to maintenance, rail yards and operational facilities at Forrestfield, Narngulu, Merredin, Albany and Wagin.”

With seeding underway in WA, Mr Fels said the next season has had a terrific start and may result in similar yields to the current crop.

He said CBH will need to ensure the two crops don’t have too much overlap.

“We need to make sure we don’t have too much carrying on to the next harvest, especially if we have another good season.

“We don’t want our system congested as the next harvest comes in.

“If [CBH] can keep up with what they are doing at the moment and keep stress testing the system, hopefully we won’t be in that situation.”