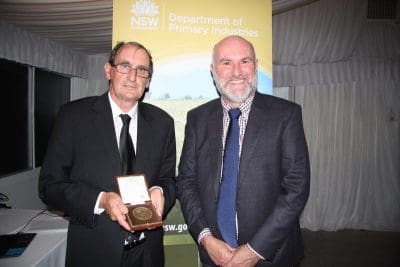 Department of Primary Industries (DPI) Director General and Farrer Memorial Trust Chairman, Scott Hansen said Mr Knights had made an outstanding contribution to the innovation and expansion of the chickpea industry.

“It is fitting that Mr Knighta be awarded the 2016 Farrer Memorial Medal in this International Year of the Pulses,” Mr Hansen said.

“Mr Knights’ research has made a significant impact on the NSW and Australian chickpea industry with the initiation of the successful national breeding program.

“Mr Knights had an extensive and successful career with the Department of Primary Industries as a chickpea breeder from 1974 until 2011.

“His valuable research into disease resistance has resulted in improved chickpea varieties for Australian growers that have increased the reliability and profitability of the crop.

“Most recently Mr Knights has been responsible for the development of the latest desi chickpea variety PBA Seamer released this spring.

“This means, through reduced fungicide use the cost of production will drop by $21 million per annum compared to the current industry standard.”

Mr Knights is recognised nationally and internationally as an authority in chickpeas.

In his oration, Mr Knights will provide a history of the chickpea industry in Australia and the breeding program that has supported it.

Mr Knights said he will highlight a number of the important problems production encountered and how they were confronted.

“The first problem the breeding program confronted was poor harvest ability,” he said.

“The early material was short and poorly suited to machine harvest. The challenge was to breed taller plants,” Mr Knights said. “

As the industry expanded, disease became the main focus for the breeding program.

Phytophthora root rot was the first major disease challenge, and was completely left field. It is limited to north eastern Australia.

“In contrast, Ascochyta blight was long anticipated before it arrived in 1998, and has become a nationwide problem.”