Bellata cropping property, Glencoe, was one property which featured in James Thomas’ study.

WITH only a small number of buyers driving the rural-property market’s highs, prices will mostly likely compress back to sustainable levels, according to Nutrien Harcourts agent James Thomas.

He said these operators were also responsible for producing 50pc of the total production.

“In our opinion, it has been that 12pc that has been driving the market in the last 20 years,” Mr Thomas said.

“They have a higher appetite for risk and a willingness to accept a lower cash return in order to expand.”

As these farmers begin to leave the market, he said prices will mostly likely steady.

“My personal opinion is that the rates of growth will start to slow. 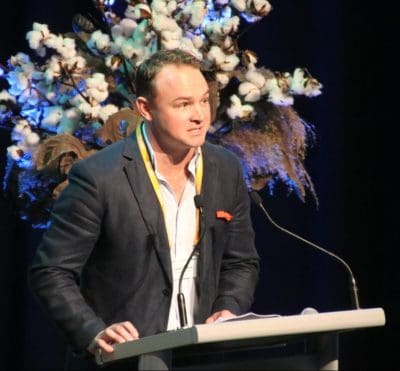 “In a lot of these auctions that have been very strong, there has often only been two or three parties bidding above what is considered evaluation level.

“As those parties have acquired the land, the market will come back to evaluation level as those few stronger purchasers have satisfied their need for expansion.”

Mr Thomas said generally an annual growth rate of 10pc is “considered to be a sustainable level” with figures at around double that not able to be maintained long term.

“If the markets have been doing 20pc the last two years, there has to be a compression back, otherwise they start to become volatile.”

He said this interest from a small amount of large, highly productive farmers and institutions has pushed out most first-time rural land buyers.

“What we are seeing is most of the operators are utilising other assets to help pay off the ones that they are acquiring at these rates.

“So that is why you have a very small minority of farmers now acquiring all the land.

“You could not go out today and buy a farm at these current values as your first up operation.

“It wouldn’t generate a return.”

As part of an ongoing thesis study, Mr Thomas has been looking into capital annual growth rates (CAGR) of rural properties in north-west New South Wales to identify the factors that drive these values.

He looked at sales of rural land over 200 hectares in 10 local government areas to identify repeat sales and generate annual growth rates over the past 35 years.

In total there were 893 repeat sales with an overall average CAGR of 10.1pc.

Mr Thomas said seasonal conditions and crop size were a major contributor to fluctuations in growth for these areas.

He said this was evidenced by drops in drought years and also a reduction in overall property sales by about 50pc.

He said the Liverpool Plains and Gunnedah were the only regions to buck this trend in the most recent drought year of 2019-20.

“These were the only two markets that identified a recovery in 2019 and 2020 and I think that can be attributed to their reliability as proven winter and summer-crop areas.”

Mr Thomas said, surprisingly, the correlation between CAGR and commodity prices was not as clear cut.

“Commodity prices on their own don’t seem to be correlated with the growth.

“It is only when they are coupled with significant levels of production that they can have a massive impact.”

He said the market also should not discount the influence of a certain continuing level of general supply and demand.

He said the key ones were interest-rate rises, bank loan-to-value ratio levels, and taxes.

Of these factors, Mr Thomas called capital gains taxes “probably the biggest restricting factor on the amount of country coming on the market”.

He said for some retiring farmers, this cost is “so significant that it defeats the purpose of selling”.

Tax implications, as well as rising interest rates, will drive an increase in leased rural land, according to Mr Thomas.

He said this will come as both supply and demand.

“If you think of Westchester for example, often the interest-rate repayments on some of these assets is less than what they would have to pay in rent.

“I think once interest rates get back to [6-8pc], it will definitely increase the demand for those.”

Mr Thomas said although these conclusions are only based on a specific area’s data set, he believes the findings can be applied across other similar cropping regions.

He said the study provides “very robust data set and one that could be used to benchmark against similar areas in other parts of NSW and Queensland”.

“Our hope is by quantifying these capital growth rates, it can enable for benchmarking and facilitate for further investment in the sector, which we think is critical given the capital-intensive nature of these operations these days.’