THE Australian cotton industry is heading towards the second biggest production year on record with potential for a 4.5-million-bale crop when harvest rolls around in April/May. 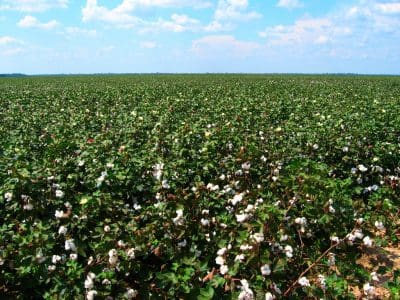 This season’s crop is below the largest national crop in 2012 when 5.3 million bales were picked, but is likely to top the following year’s production that went 4.4 million bales.

An estimated 460,000 hectares of cotton have been planted throughout the growing regions of NSW and Queensland this season, of which 340,000ha are irrigated and 120,000ha are dryland.

As the crop passes the mid-way mark, Cotton Australia chief executive Adam Kay said farmers had been encouraged to plant big acreages because of the wet spring that filled the major irrigation storage dams in the key growing valleys, and promising prices of over $500/bale.

“Some of the dams like Burrendong and Keepit filled quite well, enabling growers on those river systems to plant their full areas,” he said.

“That coincided with a fair price for cotton. Even in the last few days it has been up as high as $540/bale. That is quite encouraging for people.”

Mr Kay said the attractive prices had also been behind a big year for dryland plantings.

“The good price for cotton, combined with lower prices for small grains like sorghum, meant traditional cotton growers were all in for as much as they could, plus there were quite a few new and returning growers. Monsanto tells me there are 240 new or returning growers,” he said.

“It has been ‘storm lotto’ on the Darling Downs and through some of the other areas. If you get under a storm it is a jackpot, and if you don’t it’s disappointing. We need a good general rain in January to kick the dryland crops along.”

Mr Kay said the focus of the export market for cotton had swung from China to India in the past season.

“China had been so important to us, but China has held back on how much it is importing. It is starting to use the big stockpile it has built up,” he said.

“That has meant Australian cotton shippers have had to look to new markets to find a home for the crop. India has gone from taking 3 per cent of our crop the previous year to about 25pc of our crop this year.”

Mr Kay said the processors were well prepared to handle the big crop.

“When you think of the new investments that have been made in ginning in southern NSW at Hay, Carrathool, Whitton and Hillston, and the gins in the traditional areas, the industry is well serviced. There are about 40 gins in maintenance phase getting ready for a big crop,” he said.