TOP-PERFORMING irrigated cropping farms focus on maximising yield as a priority over managing costs, according to data presented at the Australian Cotton Conference earlier this month.

This strategy is backed by findings that, despite increased costs for fertiliser, fuel and labour, farms with high-yielding crops still record impressive profits.

Agripath founder Simon Fritsch correlated data from irrigated cropping properties across south-east Australia from 2014 to 2021, as well as considering current estimated costs for these farm types.

Based in Tamworth, Agripath works with individual farms to collect and analyse financial and production data to inform decision-making aimed at improving profitability.

The business uses benchmarking to compare farms with similar operations which recorded profits in the top 20 per cent.

Mr Fritsch said he found that overall margins were still above average, despite cost increases and supply chain issues.

“Costs are up at the moment; we are all very aware of those things, but the margins are still good,” Mr Fritsch said.

He estimated that current costs were about $5100 per hectare, up from the traditionally acknowledged figure of $4000.

Although this is over 20pc more, Mr Fritsch said using an average cotton yield of 11 bales per hectare and a $750 per bale price, margins were still rising.

He said the 2022-23 and 2020-21 figures were well about the traditional expected margins for these properties.

“All goes well when we have plenty of water and plenty of opportunity to go forward, so there is a lot to be excited about.”

Mr Fritsch said the price per bale would have to drop to $650/bale to result in the long-term average margin of $2200/ha. 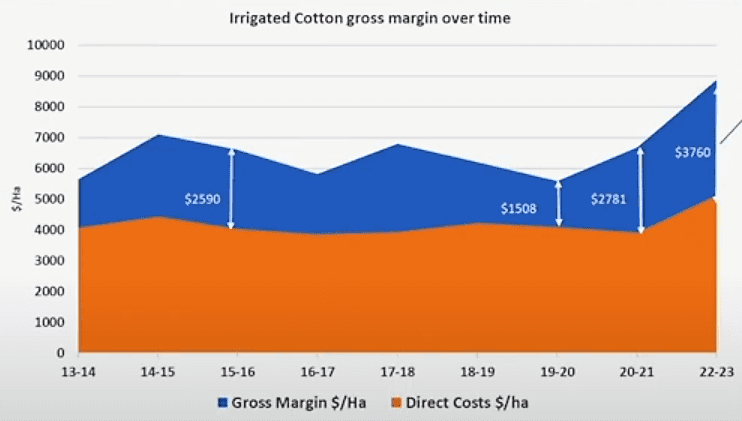 Gross margins for irrigated cotton properties in a dataset from 2013-14 to 2022-23. Source: Agripath

“The top performers are consistently averaging at least a bale per hectare above their peers throughout that entire period.

“They have done that by spending more chemical costs, more on fertiliser, slightly more on water costs and less on the total plant, machinery and labour costs.”

While agreeing that these costs need to be considered and managed, Mr Fritsch said many of these production increases were based on market and supply factors outside of the control of growers.

He said maximising yield and making informed crop choices based on the possible income and overall production are factors growers could influence.

Mr Quigley and Mr Brownhill were part of a panel titled How profit underpins sustainable farms held at the Australian Cotton Conference on August 18. 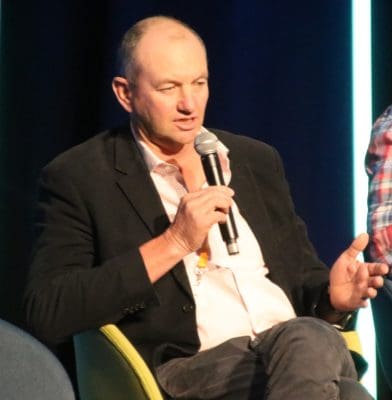 “We are a producer…and our job is to produce,” Mr Brownhill said.

“We are focusing on yield; yield and price and that will get you profit.

“Even in times when urea is currently $1060 per tonne, Roundup is nearly $9 and fuel is $2.20, we are still doing everything how we normally do it.

“We are sticking to our knitting, but we are just trying to grow more yield.”

An advocate for benchmarking, Mr Quigley said knowing his family’s data and working out how this differs from the top 20pc has informed many on-farm decisions.

“I strongly recommend getting onto a benchmarking program and getting a bit of help because it will really clarify where you need to spend your time and attention and that will turn you into a much better farmer,” Mr Quigley said.

He said his family’s operation can be highly variable due to water availably and constantly pushing yields results in better long-term profits.

“Our business philosophy is to actually drive yield…because when we let our yields run and we have those fairy tale years where you do get a really good result the gross revenue smashes it out of the park.

“If we divide that even over 10 years, it makes a significant difference.”

Mr Quigley said he found increasing yield by even a small percentage resulted in better financial outcomes than cutting costs by the same figure.

“I think if we are going to try and save every last dollar, you are missing the point.”

Mr Fritsch said it can be shocking to see how the profitability differences between the average and top-performing farms can compound over time.

“Between some of the top-performing businesses and the averages, there are differences of about 4pc return on assets year on year.

“So on a $20M asset, that is $800,000 a year difference between what these top-performing farms are doing on a similar asset compared to the average.

“Over five years, it is $4M difference in profitability and that goes a long way towards providing for the succession of the business, schooling the kids, buying the property next door.

“[This] difference in profitability is one of the things that makes a big difference between farms.

“If you think most of us only have 40 years of farming in us and if we have given up $800,000 a year on an average asset over 40 years, it is a big opportunity cost there for us to think about.”

Mr Fritsch said with rising property values, the return on assets managed (ROAM) – a universal measurement of a business’s profitability – has dropped for all farms in the study.

He said this has cut ROAM for growers in his dataset from 7.5pc to 5.5pc for the average operation and 13pc to 9pc for the top performers.

Comparing figures for an average irrigated cropping property in the dataset to an operation considered in the top 20pc. Source: Agripath

“There has been a significant change in the disparity between what the top 20pc were.

“They were typically some of those southern assets based on very cheap water.

“The industry has caught up with that and has revalued those assets because of their value.”