Crop wrap: Praying for rain in the east, mixed blessings in west

GRAIN growers across the eastern states are still praying for rain, while in the west some crops have had too much. 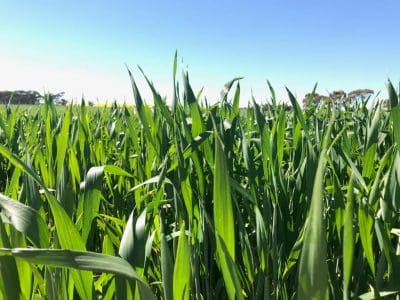 Some Western Australian wheat crops like this one at Cunderdin are on track for above-average yields. Photo: Jo Fulwood

Many central and northern NSW paddocks won’t see a header this year, while in the south of the state and into Victoria potential is fading fast, with little rain forecast in the coming weeks.

Rebecca Reardon farms Lairdoo at Moree in northern NSW, and said they hadn’t seen a season as tough as this since 1994.

“The barley and wheat crops we don’t even put a header into, and most won’t even have enough (volume) to even bale them – some we might get our seed back, but we will have to hold onto that,” she said.

“The Faba beans and chickpeas are ok because we had subsoil moisture and deep sowed them, but no in crop rain so not fantastic –  prices will help the fact that yield will not be very good.”

Ms Reardon said they planted about 70 per cent of their crops and a lot of it simply didn’t come up.

They had rain in February, giving them some subsoil moisture that many in the region don’t have, and they had 22mm in recent weeks.

Without more rain in the next few weeks, the summer cropping program at Lairdoo would have to be reconsidered.

“We cover 100km radius from Griffith and maybe five to 10 per cent might harvest, but pretty much non-harvest in most areas,” he said.

“It could be saved in two weeks if we get a rain, but no longer.”

Brett Hosking is a mixed farmer from Quambatook in the Victorian Mallee, as well as the Victorian Farmers Federation Grains president.

He said his crops were going to fall in the below average yield category – and most of Victoria was looking that way.

But prices being what they were means the news wasn’t all bad.

“The crops are still green in my area, but they are feeling the pinch of a lack of moisture,” Mr Hosking said.

“If we can get reasonable rain in the next two to three weeks we will get something, if not we will get sheep feed.

“We do feel lucky compared to some, stories hearing out of NSW and QLD, but if it doesn’t rain we won’t be far ahead of them.”

Mr Hosking said while the lack of rain was being felt across the north and north west of Victoria, those crops grown in the south west had an excess of moisture during the winter.

Mallee farmers would make changes to their management practices if rain didn’t fall in the next few weeks, Mr Hosking said, turning to hay making or livestock.

“We also had a frost event about a week ago in the Wimmera, so have heard some reports of stem frost damage but not sure what scale that’s on – it takes about a week to show up,” he said.

“That would impact the yield for those crops and potentially makes decision to move towards hay, but we will wait and see as more frosts are forecast for coming week.”

For any farmer receiving enough rain to grow something, whether it be sheep and cattle, or hay and grain, prices would be strong, Mr Hosking said.

“Those that can grow even sheep feed will be rewarded for their efforts, just perhaps not as much as they would like to be,” he said.

Warramboo, South Australia, producer Jared Sampson said while a lot his seed hadn’t established and simply blown away, rain over the past month has meant some crops now had potential.

They received 60 to 70mm for August, having only had between 50 to 80 mm up until then across the property.

“If you would have come(to the farm) a month ago, it was unrecognisable from today. Having said that there is a lot of regions that have continually missed the rain this month, especially on the east coast of the Eyre Peninsula,” he said.

“From Cleve across to the coast, they are really struggling this year, with very few crops established.”

Mr Sampson said his barley had potential as it went in early and got some rain on it.

“The crops on the lighter country that have established are looking good, but on the heavier country there is cover but not that much potential unless we have a really good September,” he said.

“We are still tracking better than last year, but last year was our worst in a considerable amount of time.”

He added that while grain prices had come back in the past week, returns would compensate lower yields somewhat if they stayed where they had been.

“Without significant rain they won’t drop too much before harvest I wouldn’t have thought –  we are also the first area in SA to kick off into harvest so we don’t see the drop off in prices when others kick off – we get into the market before other areas get into harvest and prices fall off,” Mr Sampson said.

Grain Producers SA chairman Wade Dabinett said while his farm at Parilla in the southern Mallee had been fortunate in May and June, they were relying on spring rainfall like a lot of areas across the state.

“We don’t need average rainfall to achieve average production. If we do get an inch or so in September we will have a reasonable outcome given the prices,” he said

“About half the SA crop is on a knife edge with spring rainfall, if we don’t get it in spring half the crop will be ordinary.”

However the same can’t be said for some regions, such as the northern Mallee, upper Mid-North and northern Eyre Peninsula, all of which were looking at there second or third lean year in a row.

“We are tracking worse than 2006 across a lot of the state rain wise, which was one of the worst years on record for rainfall – which just shows how far come we have come in 12 years in terms of water saving and management practices,” Mr Dabinett said.

The Esperance farmer said his home property had 18mm from March to August, which was very little, but then received 150mm in August, waterlogging some crops.

“We will still average over a tonne on the Canola with any luck which isn’t bad for such a tough start to the year,” Mr Fels said.

“We put wheat in early at the start of April, and it didn’t rain for eight weeks so is its some of the worse wheat we’ve ever had this year.

“But the Barley went in late in mid to late May and had 10mm which was bugger all, but still had regular little top up and now that good rain has come it has set it up for good potential.

“We do have some (crops) that will be no good because it was too late, but across the balance we will have good yields –  however if the rain keeps coming now we will lose areas to waterlogging, fingers crossed we just keep getting bits and pieces and we will have some pretty good crops.”

Mr Fels said while most in his area are in the same boat, with crops emerging either early, late or not at all, his second property at Geraldton had a late start to the rain at the end of May, but it hasn’t stopped since.

He added that the inland western wheatbelt had received good falls and would produce good crops, while in the north east they still hadn’t received a good rain, and some crops on the coast were waterlogged.

“WA has been a real mixed bag of winners and losers this year – so we have been lucky more than not,” Mr Fels said.

“Certainly for the guys with good crops they are looking at excellent result with grain prices, those without good crops are hoping prices hold where they are or pick back up a bit.

“When feed barley is at $350/tonne it is unbelievable, so we are trying to cash in on that without selling too much, but it will soften the blow for some people.”