Cropping, cattle and polo on show on Argentine tour

ALEX Makim has been talking about running an agricultural and polo tour to Argentina for more years than he can remember. 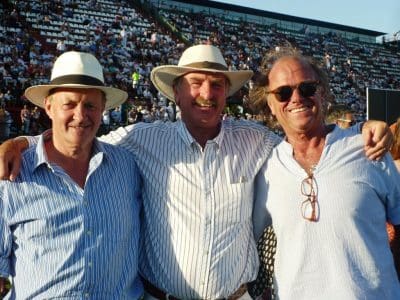 In collaboration with his friend Allan Cameron, a farmer, fifth-generation Argentinian, and principal of Cameron Farm Tours, 2017 is the year this man with a heritage from North Star in north west NSW is going to make it happen.

Through the Cameron-Makim association, it will be Mr Makim’s 14th trip to Argentina, a country he was initially drawn to through polo and horses, but one he soon found had huge agricultural scope and cultural diversity.

“I have lived there for three years of my life, and I have learned to speak the language; that’s when you really get to know the people in the country,” he said.

“When I was 15, I read about a Swiss schoolteacher at St George’s College in Buenos Aires who rode two Criollo horses all the way to the US and then shipped them back to the Pampas, and is buried with them there.

“I was hooked and wanted to see this country and learn more about horses and the Gauchos.”

Mr Makim said the Argentine ability to adapt and invent new techniques in agriculture never failed to impress, and their adoption of conservation farming and development of direct-drill machinery was a prime example.

“The maintaining of the crop residue in the paddocks to protect the soil from wind and evaporation and building up of organic matter has been a revelation to me; when I first went to Argentina they were still using big gangs of mouldboard ploughs.

“The Argentines are serious farmers.”

Mr Makim said Australia and Argentina had much in common.

“We are both migrant nations, and both countries have some incredible stories of pioneer families from the old world who have made good in their adoptive countries,” he said.

“I am a fanatic of this common link and read every book I can find on both countries.” 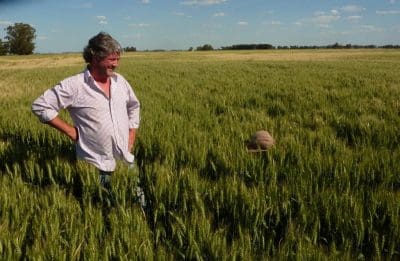 Allan Cameron in a crop of wheat on his farm in Necochea, Argentina.

Mr Makim said the tour would be visiting farms that grow summer and winter crops, and soybeans, sunflowers and maize planting, as well as wheat and barley harvesting, were likely to coincide with the trip, which will also give an insight into livestock production.

That includes the Mercado de Liniers in Buenos Aires (BA), which puts around 50,000 head per week through the yards to make it the biggest cattle market in the southern hemisphere, and studs that produce around 400 sale bulls per year.

Estancias, the Argentine equivalent of sheep and cattle stations, have not been left off the itinerary.

Some boast magnificent gardens around the homesteads with trees which are hundreds of years old; in some cases, the seeds from which they grew were brought direct from Europe by the settlers.

“We will also visit a small heritage-listed colonial town where nothing has changed for almost 100 years, and where people still ride horses down the main street.”

The tour will afford the time to get to know BA, which was settled in 1536, and has a population of around 10 million.

Alex said the cosmopolitan feel, and cultural and historic richness of the city was something he and Allan were looking forward to sharing with the tour group.

While polo in Australia is enjoying a newfound resurgence in popularity, Mr Makim said it had never gone out of fashion in Argentina, and was in fact booming, as proved by BA alone having around 300 polo fields.

The Argentine Open Tournament is to polo what Wimbledon is to tennis. Mr Makim said the tour’s visit to this hallowed event was sure to be a highlight.

“I have been to 13 Open Tournaments since 1972, on my first visit to Argentina, and the atmosphere is electric; it draws people from all over the world and is a truly great international event.”

Spectators at the 2017 tournament will also see cloned polo ponies playing; some were played by a member of the winning team in the 2016 final, to challenge those who believe that only naturally bred horses can be champions on the field.

The Storey family has been one of the most significant influences on Mr Makim and his relationship with Argentina, and led him to his first meeting with Mr Cameron last year.

“I met  Pamela Storey on my first trip to Argentina; she was a very famous polo player and pony trainer, and her great niece, Maria, recommended I get in touch with Allan, as his family has a fantastic farming operation five hours’ south of BA.

“I always want to see new areas when I visit, and this area near Necochea did not disappoint. 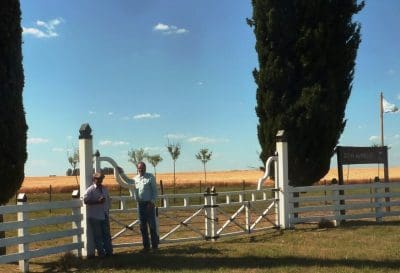 “I met Allan, and from there we have decided to merge ideas and show people a good time in Argentina, some beautiful farms and meet some wonderful like-minded people in a very exciting country.”

While some may choose to turn in early throughout the tour, there will be plenty of opportunities for people who like a glass or two of malbec and a tango around the dance floor to stay up late and enjoy the Latino atmosphere.

To find out more, email [email protected] or phone 0427 641 413 or visit the Makim and Cameron’s Tour of Argentina page on Facebook.