FOLLOWING a historic high of $6.6 billion in June 2018, new data reveals the national balance held in Farm Management Deposits (FMDs) was drawn down to $5.6 billion in March 2020, with significant state-by-state divergence in the pattern of FMD deposits and withdrawals over the past 12 months.

Data from NAB and the Department of Agriculture and Water Resources shows that between March 2019 and March 2020 there was a significantly higher rate of withdrawals in drought impacted states. “FMDs are designed to allow producers to set aside pre-tax income in the good years, which is then available as a cash flow management tool for lower production years,” Mr Horne said.

“The continued drawdown and generally flat deposits in NSW reflect the prolonged periods of drought there, while a marginal winter cropping season in WA allowed continued deposits by producers.

“This is the first time since 2014 that we’ve seen states break away from the national trend, with NSW trending to lower net deposits from December 2019 to March 2020, while WA and Victoria trended towards increased net deposits over the same period.”

Although peaks in FMD holdings are currently the lowest they have been for six years, Mr Horne said it was encouraging to see drawdowns representing only a small percentage of the total balance held.

“This moderation in withdrawals is particularly pleasing within the context of such a severe period of drought and confirms that our primary producers are very adept at managing their cash flow and using the FMD scheme to their advantage,” he said.

Year on year to March 2020, roughly $40 million was withdrawn from FMDs by NAB customers in drought impacted states of Queensland and NSW.

“Looking ahead, with the 2019/20 winter cropping season shaping up well, it will be interesting to see how growers use FMDs if production estimates are realised.

“We expect to see a continuation in FMD drawdowns in the near term as primary producers look to restock and buy seed, fertiliser and chemicals for planting following recent rainfall in drought impacted areas across the eastern states.

“The long-term effects of COVID-19 are also unknown, and it will be interesting to see what impact the pandemic has on FMD withdrawals and deposits over the coming period.” 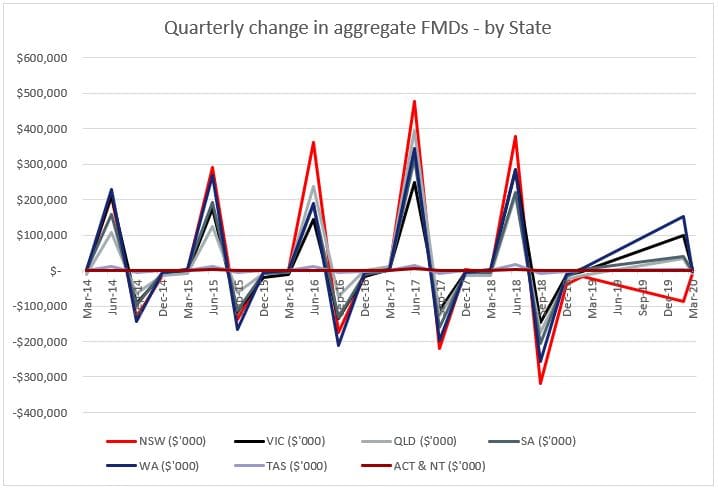