WINTER crop plantings are forecast to drop by 4 per cent to 21.1 million hectares (Mha) this season as the dry weather cuts back sowings in New South Wales, Queensland and Western Australia, according to the latest Australian crop report from ABARES. Overall winter crop production is set to fall slightly in 2018–19 to 37.7 million tonnes (Mt), but wheat and barley production are both expected to increase by 3 per cent to 21.9Mt and 9.2Mt respectively.

Canola production is forecast to fall by 16pc to 3.1Mt. In a mixed start to the winter crop season, ABARES said autumn rainfall was generally well below average but timely rainfall in May in most cropping regions in WA, South Australia, Victoria and southern NSW facilitated sowing of winter crops in these regions.

However, seasonal conditions in most cropping regions in Queensland and northern NSW were drier than average throughout autumn, which significantly constrained planting intentions.

With lower layer soil moisture at the end of autumn below to very much below average across most cropping regions in Australia, sufficient and timely winter rainfall will be critically important for crop development.

Winter rainfall is likely to be around average in cropping regions in WA but below average in most other cropping regions, according to the latest three-month rainfall outlook for June to August 2018 issued by the Bureau of Meteorology on 31 May 2018.

Barley production is forecast to increase more modestly than might be expected given the forecast increase in planted area because barley yields in WA are forecast to fall from above average back to average.

Total summer crop production is estimated to have increased by 13pc in 2017–18, driven by increased sorghum and cotton production.

Rice production in 2017–18 is estimated to have been 631,000t, a reduction of 22pc from the previous year. This fall was the result of a reduction in planted area. Rainfall was severely deficient to extremely low in many cropping areas in central and southern NSW and WA. 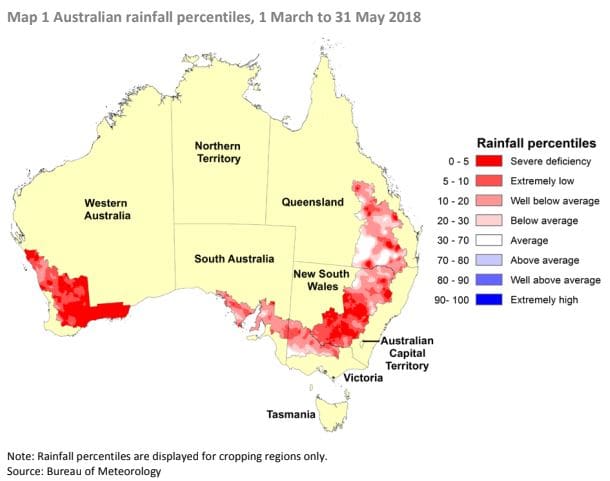 For the Australian cropping region, area-averaged rainfall during autumn 2018 was the second lowest on record and the lowest autumn since 2008.

In cropping zones in NSW and WA, area-average autumn rainfall totals were the sixth and third lowest on record.