Storm rain in northern country Victoria this morning forced a halt to wheat harvest on Chris Leed’s farm at Pyramid Hill with only 12 hectares of the winter crop to go. He put in long hours working through until 3.30 this morning trying to get as much off before the predicted rains. (Photo: Chris Leed)

RAIN falling today across Victoria and parts of New South Wales is a promising forerunner to what the Bureau of Meteorology predicts will be widespread falls across much of the eastern Australia cropping zone over the next few days.

Croppers in the northern summer cropping zones, in particular, will be pinning their hopes on the forecast rain coming to fruition as sorghum and cotton plantings are fast running out of soil moisture reserves.

For growers in the southern regions, the rain will be useful for summer crop irrigators and building soil moisture, but not so welcome by those still to harvest the last of this year’s winter crops. 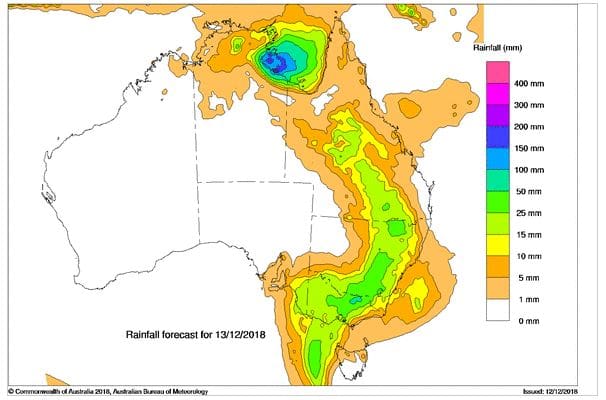 The Bureau is basing its prediction of widespread eastern rains on a developing low pressure system in the south, and the southward movement of tropical cyclone Owen that has already brought big rains and flooding to north Queensland.

A low pressure trough deepening over Victoria today has already triggered rain across much of the state, including the Wimmera and Mallee, and is moving into New South Wales, bringing the increased likelihood of showers and thunderstorms.

At the same time in the north, tropical cyclone Owen, located over the south western Gulf of Carpentaria, is expected to intensify and make landfall about the south east Gulf tomorrow, before tracking down the Queensland coast as a deep low pressure system over the weekend.

A surface trough extending from north west Queensland through the central west to the Darling Downs, combined with a strong upper trough over southern Queensland, will lead to a high chance of showers and thunderstorms in Queensland cropping areas from tomorrow.

While the Bureau is uncertain of the movement of Cyclone Owen over the weekend, it expects it to continue its south-eastward movement along the Queensland coast, creating potential for rain in the south east of the state. 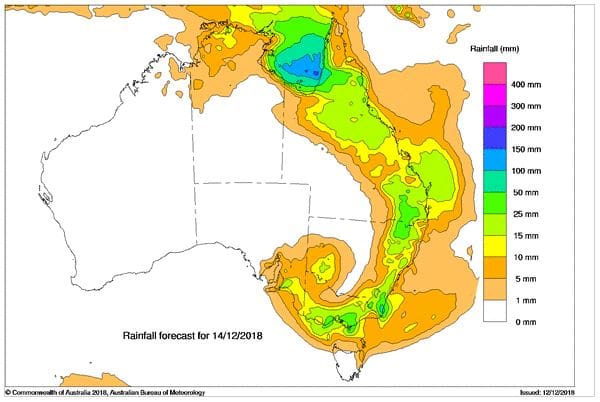 Wringing out the humidity

Bureau of Meteorology duty forecaster, Tom Fejes, said the trough developing into a low pressure system in Victoria today was connecting with the tropical moisture from the north, creating humid conditions and developing into a rain band with storms.

While the higher falls so far have been in the north east of Victoria, other areas of the state, including the Wimmera and Mallee cropping regions, had also received reasonable falls.

“There is a good chance the low will wrap back around this afternoon and there could potentially be some pretty good rainfall through parts of the Mallee and northern Wimmera this evening,” he said.

The Bureau’s duty forecaster, Peter Otto, said the upper level low pressure system over south east Australia was encouraging air to be drawn in from the tropics.

“There is a flow of hot air coming in from the South Pacific over the Darling Downs, New South Wales and the eastern parts of Victoria,” he said.

“The weather system in the upper and mid-levels currently over Victoria is basically ‘wringing’ that moisture out.”