QUEENSLAND and New South Wales grain growers are encouraged to keep up their efforts to manage mouse numbers in late sown summer crops and ahead of winter crop planting this season.

CSIRO mouse researcher Steve Henry said getting late planted sorghum through to harvest would be challenging in many areas and urged growers to liaise with their agronomists about strategies to get crops harvested as soon as possible. 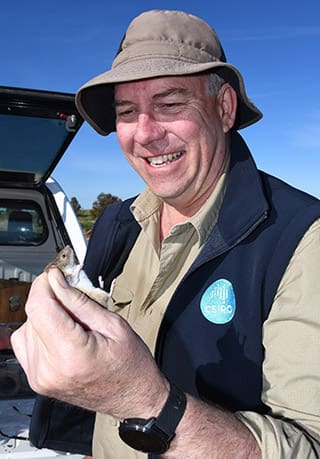 Meanwhile for those planning winter crops, he said a pre-sowing baiting strategy would be critical and needed to be actioned six weeks before planting.

“We have been seeing higher than normal mouse numbers for the past three months and growers are going to have to be really vigilant in the lead up to sowing winter crops,” Mr Henry said.

“In Queensland and areas of northern NSW, there are sorghum crops at flowering stage or ready for harvest, which is a really difficult situation to deal with in terms of mouse control.

“Baiting is difficult while mice have access to alternative food sources like sorghum heads, so my advice to growers is talk with their agronomists about what they can do to get crops through to harvest.”

Once growers have harvested summer crops, Mr Henry said it was critical they did everything possible to reduce the grain left on the ground, which could mean using livestock as a clean-up measure where possible if they were already part of their farming systems.

“For those growers planning winter crop planting in areas with mouse problems it is absolutely critical they contact their suppliers now to ensure zinc phosphide is available in the quantities they need, when they need it.”

Mr Henry said it was difficult to predict what environmental conditions would reduce mouse numbers.

“How an outbreak will end is very difficult to forecast. People talk about frost and wet weather killing mice, but if there is food, shelter and moisture in the system, mice will continue to survive,” he said.

“One of the real concerns going into winter with such a high number of mice is that we will get ‘higher than normal’ over winter survival of populations, which will mean a higher starting point for breeding in spring.”

GRDC podcast: Steve Henry discusses the options for grain growers across the northern region with mice in “fully fledged plague” numbers in some cropping zones on Queensland’s Darling Downs and through NSW. Listen to podcast here.