Mt McLaren was one of the first GrainCorp sites to open for the 2022-23 harvest last week. Photo: GrainCorp

AUSTRALIA’s 2022-23 harvest is officially under way, with GrainCorp opening the first sites for the season in Central Queensland (CQ).

“Harvest is starting to trickle in and we expect things to kick off properly this week,” a GrainCorp spokesperson said.

Opening proceedings last week were chickpeas delivered into Mt McLaren, the northernmost up-country receival site in Australia, as well as wheat into Dingo, between Emerald and Rockhampton, and Gindie, south of Emerald.

GrainCorp has also opened its Yamala depot east of Emerald in recent days for wheat.

According to ABARES estimates released in its September Australian Crop Report, Australia is forecast to produce 32.2 million tonnes (Mt) of wheat, 12.3Mt of barley and 6.6Mt of canola, all down slightly from last year.

Wishing a smooth and safe run to east coast Australia #growers this season.

Ongoing wet conditions over much of New South Wales are expected to delay the start of harvest in earnest by at least two weeks.

Outlook Ag has a team of 14 agronomists consulting on around 300,000ha of north-west NSW, and its CEO Jack Murray said the La Niña event has brought more good than bad.

“The positives are there are better-than-average yields everywhere, and we’re talking less than 5 per cent of area that would be inundated,” Mr Murray said.

He said riverbanks in north-west NSW have mostly contained flows to date, with the exception being some plains country south and east of Walgett.

“All the crops on the slopes are fine, and would be better than average, so it’s been a positive for growing all crops.

“Most of the water has gone under the crop and not over the crop.”

Mr Murray said chickpea crops are having problems with disease, and wheat protein is expected to be in the bottom end of the normal range due to nitrogen deficits brought on by big biomass and wet conditions.

The mild finish to the winter crop’s growing season is another byproduct of La Niña,

“I believe we’re going to be two weeks later than normal because of the cool.”

CBH Group is Western Australia’s biggest bulk handler by far, and yesterday received its first load for the season,  37 tonnes of canola from the Hamersley family’s Fairfield farm at Walkaway. 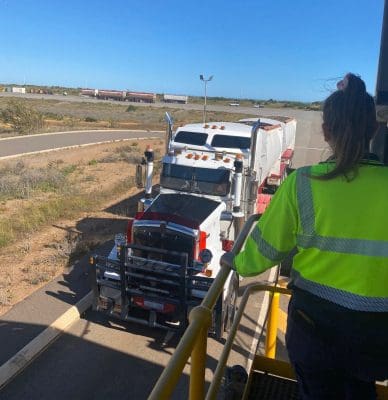 A load of canola from the Hamersley family’s Fairfield farm was CBH Group’s first load for the 2022-23 harvest. Photo: CBH Group

A load of canola into the same site, the Geraldton terminal, kicked off WA’s 2021 intake on September 22.

WA’s growing regions received a welcome 25-100 millimetres of rain last month, and further falls this month, so its harvest is not expected to get going in earnest until mid-October.
In South Australia, a mild and wet end to the growing season is expected to have harvest kick off later than normal.
“We’ve had continued rainfall across South Australia through September,” a spokesperson for Viterra, SA’s major bulk handler, said.
“Feedback from growers in the earlier regions indicates they expect to start harvest mid-late October.”
This compares with last year, when Viterra reported its first delivery for harvest occurring on October 6 at its Port Neill site.

At Swan Hill in north-west Victoria , Pearsons Group managing director Darren Pearson said the Mallee crop has the potential to be a bumper one if the weather is kind into harvest.

“Things are looking extremely good, and we’re hoping, like everyone, that the rain stops pretty soon,” Mr Pearson said.

“At the moment, the Mallee is holding up well, and there’s potential for another 2016; that was probably the last really good year we had.”

Mr Pearson said growers were spraying for rust, but were generally on top of any potential disease issues caused by the wet and mild weather.

Like everywhere, the Victorian crop is running late in its development.

“Usually towards the end of September, we’ve had a few 30-degree days; I’d say we’ve only had a couple of 22s so far and the crop is probably running a week or two later than normal.”