Depending on rainfall levels and crop location, some soybeans will be salvageable while others were completely destroyed by floodwaters. Photo: North Coast Oilseed Growers Association

THE clean-up is under way in the New South Wales north coast cropping region, with soybean and rice farmers still assessing the damage caused by a deluge of rain that has smashed the district in the past fortnight.

North Coast Oilseed Growers Association president Paul Fleming said the flooding has been “disastrous” for some growers in the district, but not as bad as first thought.

“It’s hard to say because everyone is in clean-up mode, but close to 40 to 50 per cent of soybeans might be written off,” Mr Fleming said.

Mr Fleming said the extent of losses will vary between farms and paddocks, with low-lying and downstream crops sustaining irretrievable damage.

“Where the water was slow-moving and wasn’t over them too long, they aren’t too bad,” he said.

“If the water was running fast or the area was flat, farmers aren’t recovering much.”

The uneven nature of the flooding is demonstrated by the varied experiences of Mr Fleming’s family, who farm three properties between Casino and Coraki.

He said flooding at his brother’s property was within an inch of reaching the floorboards, while his sister’s residence had more intense damage.

“My sister’s property, that we share farm, it went under to the roof.

“We have lived here all our lives and I’ve never seen anything like it.”

North of Casino, rice and soybean farmer Brett Slater is optimistic about the impacts of floodwater on his crops.

“Not everything is going to come back, but most of the rice will come back,” Mr Slater said.

“The soybeans where it was really wet, I doubt they will come back but where there was a bit of still water, they will be alright.

“It’s a setback but there is a lot more people out there who don’t know what they are going to do.” 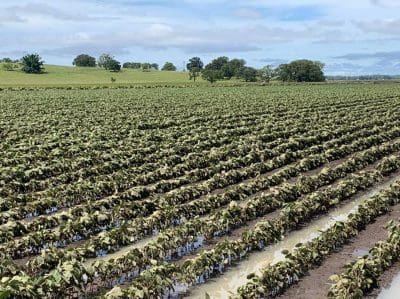 Soybean farmer Ron Du Frocq, whose property is located between Casino and Lismore, said “time will tell” the extent of the damage to crops in the district.

“On our own place, where the water wasn’t overly deep and got away, we have hope, and anywhere it was three to four metres deep, they are just dead.”

Mr Du Frocq said many farmers in his region who were able to plant in November are suffering the disappointment of seeing parts of a high-yielding crop destroyed.

“The early planted crops looked fantastic, they were going to be a big crop.

“Our neighbour has about 1000 acres of November-planted stuff and on his lower country; it is not looking very good.

Blessing for some districts

Although some farmers are lamenting the loss of their November-planted crop, Mr Fleming said flooding and high rainfall in some regions late last year meant many growers were unable to plant a soybean crop.

“The crop was a bit smaller this year because there’s been rain all the way through, so probably a third of the area wasn’t planted,” he said.

“If you were in the lower areas, it was probably a blessing in the end.

“A lot of the lower country didn’t end up being planted and, in the end, most of it would have been lost.”

Both Mr Fleming and Mr Slater are most hopeful about the success of their rice, which is traditionally more flood tolerant than other crops.

Mr Fleming said he expected to harvest most of his early planted crop.

“Timing is pretty important with the rice as well; ours was planted pretty early so it’s got heads on it.”

Mr Fleming said the level of damage in his rice crop may not be the same for all NSW growers.

“I think a lot of rice has been lost from what I have heard; it is hard to tell at this stage.”