AUSTRALIA’s winter crop production is expected to decrease in 2017-18 as a result of unfavourable conditions in many key cropping regions, according to the latest Australian Crop Report by the Australian Bureau of Agricultural and Resource Economics and Sciences (ABARES). 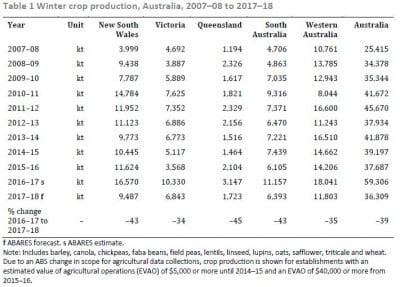 “Seasonal conditions were mixed for crops during winter and as a result the condition of crops at the start of spring varied significantly.

“The decrease for winter crop production largely reflects an expected fall in yields from the exceptionally high yields of 2016–17.”

Production decreases are forecast for the three major winter crops with wheat production forecast to decrease by 38pc to 21.6Mt, barley production by 40pc to 8Mt and canola production by 33pc to 2.8Mt.

“These forecasts will only be achieved if spring rainfall is sufficient and timely, especially in central west New South Wales and the Eyre and Yorke peninsulas in South Australia,” Mr Gooday said.

“According to the latest three-month rainfall outlook issued by the Bureau of Meteorology, spring rainfall will likely be around average in most cropping regions.” 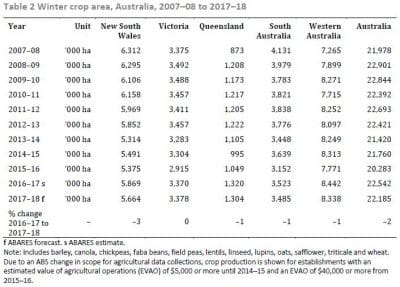 ABARES is predicting the area planted to crops this coming summer will rise by 3pc to 1.4 million hectares (Mha).

The area planted to rice and irrigated cotton is forecast to rise given the availability of irrigation water.

The area planted to cotton is forecast to fall by 23pc to 430,000ha, mainly due to a forecast decline in area planted to dryland cotton of 73pc to 56,000ha, in response to low levels of soil moisture.

However, irrigated cotton is forecast to rise by 7pc to 374,000ha as a result of an increase in the supply of irrigation water and favourable returns from growing irrigated cotton compared with alternative crops.

On August 28, average storage levels of public irrigation dams serving cotton-growing regions were around 67pc of capacity, 11 percentage points higher than at the same date in 2016.

Australian cotton production in 2017–18 is forecast to rise by 2pc to 956,000 tonnes of cotton lint and around 1.4Mt of cottonseed, reflecting a forecast 33pc rise in the average yield, partially offset by an expected 23pc decline in planted area.

Total summer crop production is forecast to rise by 21pc to around 4.6Mt. 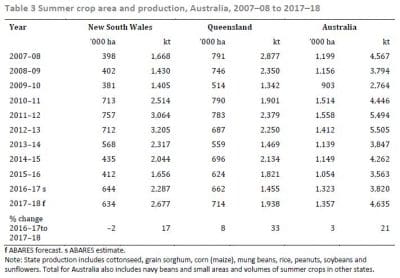