A bumper cropping year has filled the large grain storage-pads at AA Co’s Goonoo Feedlot to capacity for the first time in recent memory.

Goonoo, 20km south of Comet, is Central Queensland’s largest feedlot and one of the region’s largest individual users of grain and hay, feeding out 240 tonnes of ration each day.

Goonoo is a 100 percent Wagyu feeding operation, with around 17,500 F1 to full blood Wagyu cattle occupying the feedlot on 300-to-500 day feed programs at any given time.

The vast majority of cattle Goonoo feeds are company-bred cattle, the progeny of AA Co’s Wagyu sires over its Barkly composite females.

The 240 tonnes of ration fed out each day comprises 130t of grain and a balance of hay, silage, cottonseed, cotton hulls and liquid feeds.

Feeding cattle for marbling is more of a marathon than a sprint, explained Goonoo Feedlot and Station manager Marcus Doumany during an AgForce tour of the facility last Friday.

With 900 hectares of irrigation and 6000 hectares of dryland farmland on the Comet River floodplain, in a good cropping year Goonoo’s farming operations can grow about half the feedlot’s annual feed requirements.

Manure produced by the feedlot also benefits Goonoo’s farming country, with about 10-15 tonnes per hectare applied across the farming area ahead of new crops each year.

The feedlot is currently using a 50-50 sorghum-wheat blend in its ration but is now switching to a sorghum-barley ration to suit the hotter weather now arriving with summer. 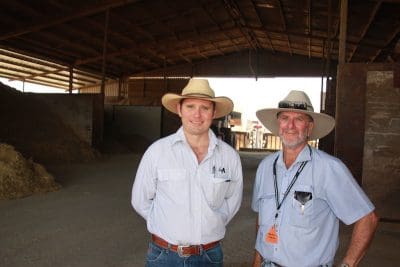 Goonoo Feedlot and Station Manager Marcus Doumany and QDAF agonomist Maurie Conway on the AgForce Grains tour of the feedlot last Friday. Click on pictures to view in larger format.

Mr Doumany and Goonoo Farm Manager Will Woolcock hosted an AgForce bus tour on Friday, and said the feedlot’s grain and hay storages were brimming with feed after a bumper cropping year. 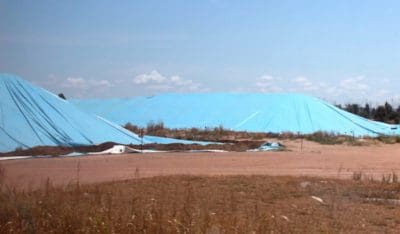 In addition to sorghum, Goonoo now has a full pad of barley and another of wheat stored.

“For the first time in a lot of people’s recent memories the pads are full here,” Mr Doumany said, pointing to vast tarpaulin covered mounds of grain. 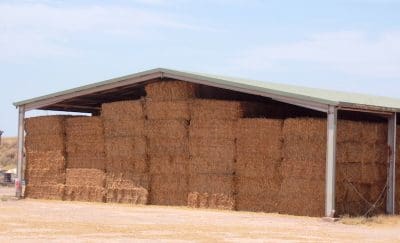 Goonoo’s hay sheds are filled to capacity with barley and sorghum hay. 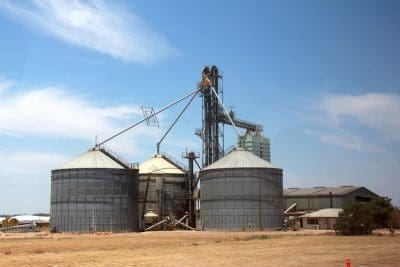 The Goonoo mill has four steam flakers running 36 inch rollers, which, while not the largest available, are ideal for milling sorghum, the staple grain supply in CQ and the cornerstone of Goonoo’s ration. 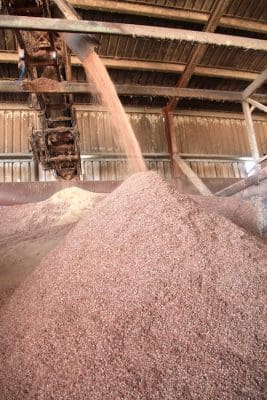 Computerised batching and feeding systems ensure precise allocation of feed to within 0.11 of a percent. Across the 240 tonnes fed out every day, that equates to an error rate of less than 80kg. 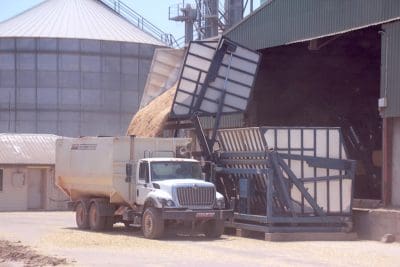 Cattle are fed twice a day, within 20 minutes of the same time every day, to ensure consistency.

The two batch boxes pictured above ensure a seamless sequence – as one 10t batch is loaded onto a truck, the next 10t batch is being prepared. Two trucks work in sequence, with a third available if required. 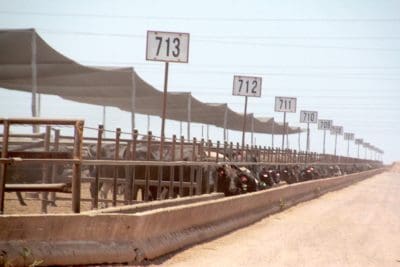 Weaners are brought from AA Co’s northern breeding properties to Goonoo at 200kg for backgrounding on buffel and forage. They enter the feedlot at 380kg-400kg, with the aim of producing a 700kg live animal. 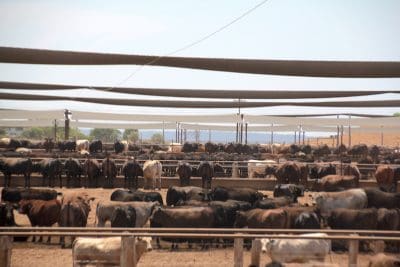 Shade and heat management is a critical focus of the feedlot’s animal welfare protocol.

With the focus of long-feeding Wagyu programs on building marbling, Goonoo aims for a growth rate of around 1 kg per day. Crossbreds in the feedlot are typically producing a marbling scores of 5 plus. 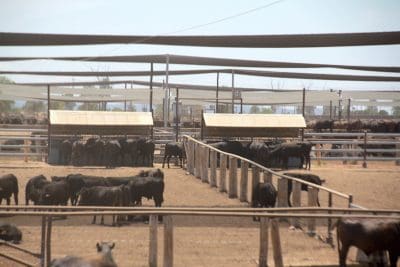 The feed bins use ear-tag readers and weigh cells to accurately measure and record the precise feed intake of individual animals. 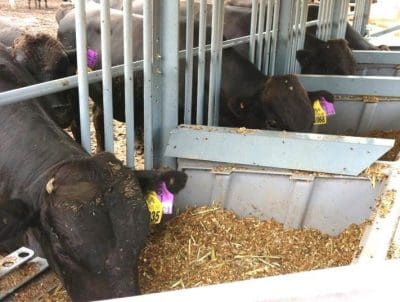 That data can then be compared with bodyweight gain and carcase quality data of the same animal to assess its feed conversion efficiency.

This enables the identification of genetics with the best combination of fertility, carcase traits, feed conversion performance and growth rate.

Net feed intake across a typical mob might average 7:1 (that is 7kg of feed consumed to produce 1kg of weight gain).

The GrowSafe bins provide a cost effective, low-labour means of identifying feed conversion efficiency of individual animals on a large scale. AA Co was the first in Australia to install the technology.

It means the less efficient feed converters can be culled from breeding programs, while the better performing genetics can be identified and then fully exploited through ET and AI programs and spread through a herd as quickly and deeply as possible.

Mr Doumany said the technology was playing a valuable role in the company’s herd.

It is also hoped that the technology may help to identify outliers with standout figures for growth, feed conversion and marbling, but Mr Doumany said it has not yet found the “golden goose”.