A FIRE on board a CSL-owned bulk carrier berthed at Port Kembla in New South Wales which briefly disrupted coal shipments has not affected agricultural vessel movements at this major Australian bulk port. 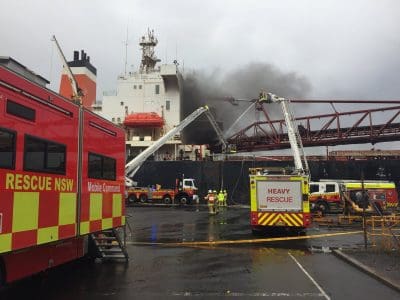 The fire broke out in the hold of the Iron Chieftain, which was carrying mineral dolomite loaded at Ardrossan in South Australia, and destined for use in BlueScope’s Port Kembla steelworks.

The fire started early on Monday morning, and Australian Transport Safety Bureau (ATSB) is investigating the fire, which is believed to have been started by a conveyor belt used to discharge the cargo.

Three ATSB investigators are now looking into the incident, which caused no injuries to crew or those at the port.

Dolomite is used in fertiliser, stockfeed and manufacturing as well as in steelmaking.

Along with Newcastle, Port Kembla is one of NSW’s two bulk grain ports, but has exported negligible amounts of grain in recent months due to the unusually dry growing season for NSW’s 2017 winter crop, which has decimated the state’s exportable surplus.

The Quattro operation is a joint venture of grain traders Cargill, COFCO and Emerald Grain and logistics company, Qube, and is a receival point for fertiliser cargoes.

“It was on Berth 113, approximately one kilometre from our facility, and the fire was well attended by emergency services and put out by Monday afternoon.”

GrainCorp has also confirmed the fire did not affect its operations.