THE Australian grains industry is in desperate need of a makeover and would be better served by an industry-owned body that could oversee marketing and manage consumer expectations in a fast-changing world. That’s the view of north west New South Wales grain and beef farmer and former policy and stakeholder representative across a number of industry organisations, Oscar Pearse, who says the grains industry is 20 years behind the red meat industry in terms of consolidating its representation.

Speaking at the 2019 Summer Grains Conference, Mr Pearse said the current grain industry structure was “a mess” and compared it to the state of his shed on the farm: “It’s just chaotic. It’s time to clean things up”.

“But it could be. There have been years of discussion about should we form an industry-owned company, but there has been absolutely no progress.

“With producer representation, there have been industry company models come and go. Again, we have had nearly a decade of no change, no progress.

“But the good news on that front is we now have GPA (Grain Producers Australia) and GrainGrowers working so cooperatively compared to what it has been in the past. That relationship is getting so much better with people working together. So, there is good progress being made there.

“The problem is, to my mind, that given how long we have done nothing, not just in terms of GRDC but also a whole host of subsidiary service bodies like AEGIC (Australian Export Grains Innovation Centre) and GTA (Grain Trade Australia), it is chaotic.”

Mr Pearse said it might be time for the Federal Government to step in and restructure the industry.

“What I’m saying is we can’t do it ourselves. We need to go to the Federal Minister for Agriculture, Bridget McKenzie, and ask her to intervene because, essentially, ‘the kids need Mum to come and make us clean up our room’,” he said. 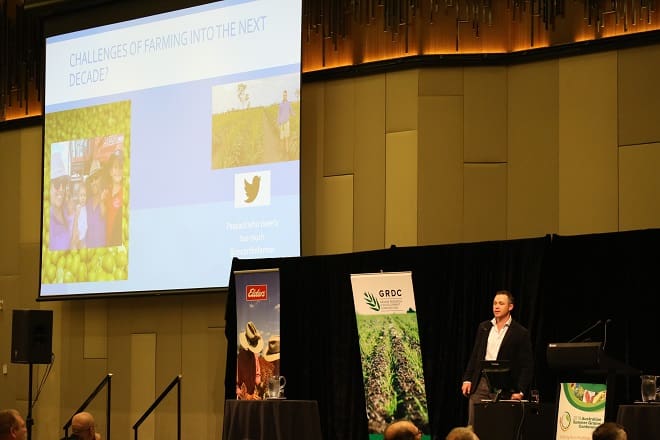 Oscar Pearse used a presentation at the 2019 Australian Summer Grains Conference to call for an overhaul of the structure of the Australian grains industry. (Photo: Meg Kummerow)

Mr Pearse said the red meat industry 20 years ago pulled together lotfeeders, Cattle Council and the MLA (Meat and Livestock Australia) into a workable coalition and in recent weeks had developed a white paper to further streamline the industry structure.

“They are actually going from where they are now to creating even better synergies, better marketing and better accountability because they will have RMAC (Red Meat Advisory Council), MLA as the single RDC marketer, and are pulling together Ausmeat and Safemeat so there is one single delivery body,” he said.

“They will be consolidating in three industry groups. Compare that streamlined, coordinated approach to everything from research, food safety systems to on-farm QA. If it is in one house it can be properly coordinated. That’s what the grain industry doesn’t have.

“As the red meat industry is going in the right direction to make itself more efficient, responsive and able to deal with all the challenges, the grain industry is still 20 years behind. We have to change.”

Mr Pearse said structural change was in the interests of all grass-roots producers.

“We are all levy payers. If we keep our current systems we can never really have confidence our levies are being used in the best possible way. Not to criticise the GRDC research program, but other industries and other structures can have those oversight roles in a better way,” he said.

“The second thing for producers is to understand that consumers are making decisions based on a whole range of influences. What they buy and the markets we can access hits us directly in the hip pocket.”

He said the grains sector, and agriculture overall, needed to speak with a unified voice to manage public perception and cut through to consumers.

“Agriculture has been in a siege mentality, particularly in the last six months. It doesn’t matter whether it is water use, chemical use or GMOs, there’s someone in the community who is unhappy with a practice or system we have in place,” he said.

“It is not about PR campaigns with ‘feel good’, happy, smiling farmers. That is irrelevant. That is just to make farmers feel good about themselves. What matters are consumers. What matters is being able to measure what all the noise of the social media debates and what the cumulative effect is on consumption. Consumption is what determines our income,” he said.

Mr Pearse said that was part of the reason the grains industry needed a body that monitored data from every point of sale of the product, analysed it and formulated a marketing and public relations strategy around it.

“You can then do things like live issues management. So, if you have a 40 per cent spike in articles worried about glyphosate use, you can now measure what actually happens. You can say, for instance, it caused a two per cent decline in the consumption of bread. Or it caused a 15pc decline in consumption of pasta for three weeks running, and then it disappeared and things went back to normal. If you measure things and understand what is going on it is quantifying,” he said.

“You don’t go into marketing just to make farmers feel good about themselves. That has been the problem in a lot of Australian agriculture with communications that are done by farmers. It looks good to us, but that isn’t necessarily what is changing consumer values. You can’t know that unless you measure it.”