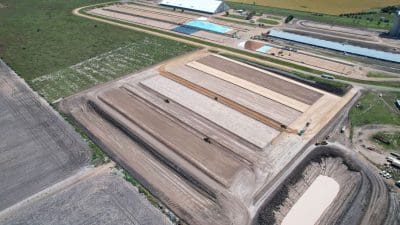 Additional storage is added to Moree site prior to 2021 harvest. Photo: GrainCorp

GRAINCORP Limited earnings for the year to September 30 at $331 million are more than triple the $108M recorded in FY20, and its net profit after tax at $139M is up from a $16M loss in the previous year.

GrainCorp managing director and CEO Robert Spurway said the results reflect increased volume from the bumper 2020-21 winter-crop harvest, and the impact of Canada’s drought as contributing to buoying demand for Australian grain.

“It is an exceptional result for GrainCorp,” Mr Spurway said, adding that it was at the top end of the $310-$330M earnings guidance issued in August.

As eastern Australia’s largest bulk handler by far, and the owner of seven export terminals, grain handled increased by 142 per cent from FY20, when drought impacted production levels in NSW and Queensland.

GrainCorp terminals export grain owned by the company, and also load cargoes for other traders.

Mr Spurway also voiced the observation that every grain exporter in Australia could make: “The drought in Canada has overall been of benefit and has provided uplift to the business”.

In delivering the FY21 results, both GrainCorp’s chief financial officer Ian Morrison and Mr Spurway spoke about how the company’s supply-chain efficiencies have come to the fore this year.

“What we’re seeing is the value of our up-country assets through to port,” Mr Spurway said.

“The premium for being able to store and move that grain is pretty significant.”

Mr Morrison said grain received into the GrainCorp network at 16.5Mt was up from 4.2Mt last year.

He said the last big-volume year for GrainCorp was FY17, and since then, the company has changed its strategy.

“We are more aggressive in terms of competing and dragging grain through the infrastructure,” Mr Morrison said.

“We are the owner of more of the task them we have been historically.”

Rain has stopped harvest in parts of eastern Australia this week, and with a La Niña event in play, Mr Spurway was asked what effect this could have on GrainCorp’s FY22 outlook.

“It’s really too early to be concerned about rain,” Mr Spurway said.

“It’s not something we see as being a negative driver.”

Mr Spurway said harvest in Queensland was largely complete, and some growers in northern NSW will be nervous about the impact of rain on their crops.

“Below northern NSW…you can see that crops are at least a week or more away from harvest.

“The rain currently is unlikely to affect those crops.”

Mr Spurway said the “silver lining” was that rain is beneficial for summer crops including sorghum, of which GrainCorp is a major handler and exporter, and was also improving subsoil moisture ahead of the planting of the 2022 winter crop.

He said rain would not affect volume.

“There remains plenty of demand for all grades of wheat and barley, including feedgrain.

“We’re keeping strong confidence in our outlook regardless of the rain.”

“We are seeing very good demand for Australian grain across the board.

“The margins have been pretty good.”

Mr Spurway said GrainCorp has to date received 2.5Mt from the current harvest.

“The ‘22 harvest is under way, and it will again be a well above-average crop, and it sets us up well for this year and the year beyond.”

“We would expect to see crop receivals accelerate over the next couple of weeks as we get into NSW and Victoria.”

He said GrainCorp had rolled into the new financial year with “very significant carry-out”, and its terminals have exported just under 1Mt since October 1.

Despite COVID restrictions limiting cross-border movements, Mr Spurway said GrainCorp has a harvest workforce in place, and most of it came from casuals who were engaged for last year’s bumper harvest.

“We had roughly 70pc of harvest casuals say they’d return, and we’ve seen that play out.

Mr Spurway said GrainCorp has employed around 3000 casuals for the current harvest.

“That’s not causing us any concerns or risk in the outlook.”

In offshore operations, GrainCorp said it has closed its office in Hamburg, Germany.

Following delays in construction, GrainCorp is expecting its Fraser Grain Terminal in Canada, to open in coming months.

The company spent C$22.5m on the Vancouver facility in FY21.

“We have a positive outlook for FY22 with high carry-out, favourable crop conditions, and demand for Australian grain.

Get our free cropping news straight to your inbox – Click here