Condamine grower Chris Cook (right) shows Rebel Seeds director Andrew Butler and his son Matthew his first crop of Borlaug 100 wheat. The 80-hectare crop was planted on June 8 at a depth of 18 centimetres on 50cm spacings.

FOUR Queensland growers have taken the unprecedented step of commercialising a CIMMYT wheat variety which is shaping up as being ideal for their target market, feedlots.

Named Borlaug 100 to mark the centenary of the birth in 1914 of Nobel Peace Prize-winning CIMMYT wheat scientist, Norman Borlaug, the variety is grown as a milling wheat in Mexico, and is appearing in Australia’s National Variety Trials (NVT) Guide for the first time next year.

In the lead-up to its commercial release, Mr Butler, Mr Gibson and 14 others growers spread from Goondiwindi to Dysart this year harvested a total of around 2300 hectares of Borlaug 100, its biggest ever area in Australia.

Borlaug 100 arrived in Australia in 2015 via the CIMMYT-Australia-ICARDA Germplasm Evaluation (CAIGE) project after it caught the eye of the Australian wheat-breeding delegation which biennially visits Mexico’s International Maize and Wheat Improvement Center, commonly known as CIMMYT.

Along with the International Center for Agricultural Research in the Dry Areas (ICARDA), CIMMYT is the world’s premier spring wheat improvement centre. Both contribute genetics to Australian breeding programs.

However, Rebel Seeds has picked up Borlaug 100 as is.

“In dry conditions it can yield strongly, and it also does well in wet conditions, so in our region it could replace any wheat going into the intensive livestock market,” Mr Mickelborough said.

“…in our region it could replace any wheat going to…intensive livestock..”

And on the Darling Downs and Maranoa regions, what a market it is.

At 200 to 500 kilometres from the nearest flour mill or export point in Brisbane, the regions support more than 400,000 head of cattle on feed, close to half the national total, with wheat the preferred feedgrain for their daily 10 kilogram-per-head requirement.

While export and flour production in south east Queensland once defined the regions as Prime Hard producers, growers like the Rebel Seeds partners now see chasing protein to achieve milling grades as a false economy.

“There’s no economic advantage for us in producing protein unless we can find niche markets with reasonable volumes.

“In the absence of these opportunities, feedlots are our only market. They want as much wheat as they can get, and they don’t care what the protein is.”

The Rebel Seeds partners met on a Grains Research Foundation study tour of the United States in 2015. 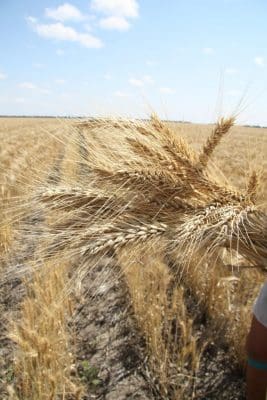 “A conversation we had hit on the fact that we all wanted to grow a straight-out high-yielding wheat without a protein requirement we could sell to the feedlots, and there wasn’t one, and that led us to thinking we might be able to find one ourselves.”

Richard Trethowan is the director of the University of Sydney’s IA Watson Grains Research Centre at Narrabri, and part of the team which selected Borlaug 100 for inclusion in CAIGE’s Multi Environment Trials over seven sites across Australia.

He has worked for nearly 30 years as a wheat breeder and pre-breeder in Australia and at CIMMYT, and has walked and talked with the Rebel Seeds partners at the CAIGE site in Narrabri, and on their self-funded 2016 trip to CIMMYT, places which normally appeal only to researchers and breeding-company personnel.

“What they as growers see that breeders don’t see is the value in Borlaug 100 the way it is, and what they’ve done shows us there’s another use for CAIGE germplasm,” Professor Trethowan said.

“It’s encouraging to see a group of growers in a niche market doing something to benefit themselves at a regional level.”

Professor Trethowan said Borlaug 100 was one of the top performers in the 2017 CAIGE program, and Australian seed companies have picked it up to cross within their breeding programs.

“Borlaug has a good yield engine that it gets through grain size, its ability to maintain grain weight under stress, and its favourable response to irrigation, and the seed companies can see value in that.”

“At the NVT site at Condamine in early October this year, we could see its heads were trying to put on nine rows across in various places up and down the head,” Mr Mickelborough said.

“It’s not pretty, but that ability to flex under what the plant considers to be good conditions, and the good seed size, is where the yield is coming from.”

Based on 2017 NVT data for 15 main-season wheats at 11 sites in Queensland and north west New South Wales, Borlaug 100 came out at 16 per cent above the average yield, ahead of Mustang at 8pc above average, and Suntop at 4pc above average.

Rebel Seeds this year distributed 102 tonnes of the 108t of Borlaug 100 seed grown in 2017, up from 437 kilograms which Mr Mickelborough and Condamine grower Brett Bidstrup bulked up in 2017 from CAIGE’s quarantine-compliant release.

The company is already in discussions with container packers with an eye to supplying export milling markets, and may seek a milling classification from Wheat Quality Australia further down the track.

Rebel Seeds has signed a Standard Material Transfer Agreement which requires it to pay a royalty for Borlaug 100 to CIMMYT.

Rebel Seeds is also looking at releasing an ICARDA wheat variety, as well as a chickpea variety.