Headers are getting bogged across Australia, including on the sandy soils of Robinvale in north-west Victoria. Photo: Dave Schuckar, DASAG

A RUN of mostly fine days has allowed harvest in Queensland and northern New South Wales to gain some serious traction, and a handful of operations have completed harvest and moved into drying and carting their grain.

After a remarkably showery and mild northern spring more reminiscent of Scotland or Denmark than the Moree region, reports are coming through of precious little Prime Hard milling wheat, and plenty of malting barley.

However, grain quality in Queensland is good overall and undulating country in northern NSW has yielded some pleasing results to date.

In the south, direct heading of canola is under way, as cold and showery conditions further thwart a start in earnest of the cereal harvest which is normally well advanced by this time of year.

Reports generally are coming through of below-average test weights for wheat and barley, and some canola and cereal yield losses due to disease and shattering.

Boolah Farms has just finished harvesting on its 10,000 hectares of country east of the Newell Highway in the Moree region, and CEO Sam Conway said below-average protein in wheat and borderline testweights have been the hallmark.

On the plus side, malting barley has had no trouble staying under maximum protein levels.

“Our malt to feed ratio is as high as it’s ever been,” Mr Conway said.

“Wheat has been lower in protein, but everything else has been good; we’ve had APW and H2, and nothing’s gone into feed.”

Mr Conway said yields turned out to be a little less than anticipated.

“They weren’t quite as good as what we thought we were looking at; the average for wheat is 4.9-5 tonnes per hectare.” 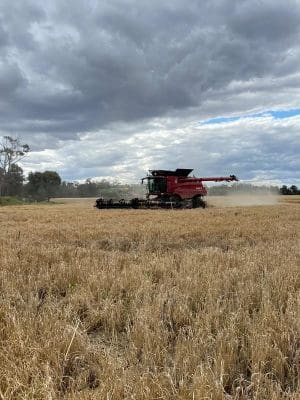 Half of Boolah Farms winter cereals in the Moree region were harvested with moisture content in excess of the 12.5pc required for sound-grade specs, and it is being dried down from up to 14.5pc moisture in silos with fans blowing ambient-temperature air.

“We got going around Moree on October 28, and we were very lucky to miss that rain that fell from Narrabri south; we got 5 millimetres and it stopped us for one day.”

The decision to harvest at high moisture saw Boolah Farms call in additional services at short notice to get the crop off into the bin amid storms and showers popping up across the region.

“We had seven contractors running.”

That gave Boolah a mix of wheeled and tracked headers to divvy up the damp and wet country.

Mr Conway estimated growers in the wider district were on average halfway through harvest, and would make “a pretty big hole in it” by this time next week, weather permitting.

Boolah Farms has in recent days started harvest on its Gunnedah aggregation, which includes Milchengowrie.

The aggregation is currently direct heading canola at a “very slow” 3-5 kilometres per hour, and has abandoned plans to windrow first, given the lateness in harvest already.

Oil levels around 43pc have been pleasing.

Priag Marketing principal Kevin Schwager said the wider Narrabri district was up to three weeks behind its normal schedule this harvest.

“There’s still plenty of country that’s boggy and got water on it, but plenty of people are moving, and more and more headers are arriving,” Mr Schwager said.

“We’re starting to get into the swing of things.”

He said oil levels in canola at 42-47pc are “pretty good”, although the odd load is registering sub 42pc.

“Yields are acceptable, but there has been some shelling out due to heavy pre-harvest wind and rain; by and large, the gross margins on canola are satisfactory.”

Mr Schwager said wheat yields were generally good, but quality has been variable, with falling numbers as an indication of sprouting seen to date as low as 140 seconds.

APH1 wheat with a minimum protein of 14pc appears to be a rarity south of the Queensland border, and Mr Schwager said “a sprinkling of H2 and APH2”, of minimum 11.5pc and 13pc protein respectively, has been seen to date.

“On quality… the two biggies are low falling numbers and testweights…and SFW is capturing most of that.”

The grade spread of $80/t between APW as the lowest milling grade, and the sought-after APH2 indicates the rarity of high-protein wheat, a scenario unlikely to change as harvest ramps up in the even wetter southern and central parts of NSW, and in Victoria.

Flooding in NSW and parts of Victoria and Queensland has done severe damage to roads, and Rankins Springs-based harvesting contractor Rob Gribble said carting grain is as difficult as harvesting it in many places.

“Headers can get along in the paddock, but you’ve got to be careful with chaser bins and trucks, and road conditions are just atrocious,” Mr Gribble said.

“Major tar roads are breaking up and there are…holes in them as big as a bonnet on a Landcruiser.”

He said these can be 500mm deep, and make for slow and dangerous transporting of grain.

Mr Gribble is the NSW representative on the Australian Custom Harvesters executive, and said flooding, boggy paddocks and ongoing rain events made for “very difficult” conditions.

“It’s stop-start because of the weather.”

“Plenty of our members have gone up north and done bugger all because of it.

Yields and oil content are said to be good, and the barley harvest could gather pace in the southern half of NSW as soon as next week if the weather warms up, and rain stays away.

“Crops are at least two weeks later than normal this year.”

Some canola on the southern and south-west slopes of NSW is being windrowed, and some growers are looking at excellent oil and bumper yields where waterlogging has not been as issue.

In Victoria, DASAG principal Dave Schuckar is based at Murtoa in the Wimmera, and operates a single-machine contract harvesting and parts and repair business.

He has employed two backpackers out from the United Kingdom, and was expecting the three of them to have been working flat out for several weeks by now.

“They arrived on September 7, and they’ve done four days on hay and two days of harvest.”

“Last year we started on October 28 and finished on New Year; my run is eight weeks with good weather.”

Harvest looks like pushing well into January, even without any further rain.

“If the Mallee’s only starting now, it wouldn’t be 1pc of grain harvested so far.”

Mr Schuckar said he recently experienced a downpour of around 25mm in 15 minutes, and these events are making life hard for windrowers, balers and harvesters, as well as growers.

“There’s a bit of shot grain in the Mallee now, and there has been some hail.

“Some of the barley’s starting to lodge and drop heads.

Mr Schuckar said his header got bogged eight times in one day harvesting in the sandy Robinvale district.

However, the pre-emptive move of fitting a bridle to the underside of the machine has made attaching a shackle easier when the inevitable bogging takes place.

He said fodder losses will be considerable, with one grower writing off 2500ha of 3000ha of vetch cut for hay due to rain damage.

However, growers and contractors are optimistic about the benefits of a full subsoil-moisture profile for upcoming crops, even it makes harvest 2022 one of the most challenging.