FROM extreme weather to problematic soil types, pests and dangerous animals, cotton-growing in northern Australia is not for the faint hearted.

However, growers, agronomists and investors who are on the front line of this developing industry are not only optimistic but excited about the challenge of this new agriculture frontier.

A packed room at the Australian Cotton Conference heard about the highs, heartaches and hazards of this new industry from representatives farming at the Ord in Western Australia, Northern Territory and northern Queensland.

Ord River District Cooperative chair, cotton grower and mixed farmer Fritz Bolton has had a love for the north since his youth but understands the challenges of developing an entirely new cropping system.

Mr Bolton owns and operates a 975-hectare operation in the Ord, WA.

“There is not very often that you get the opportunity to start something new,” Mr Bolton said.

“It’s addictive and it is really exciting, and it will be successful…but it is not easy.

He said all successful northern growers are aware that they are part of a “high-risk, high-return” venture.

“We are very much used to that, and we have got some fantastic plans in place that will change probably tomorrow or the next day.”

Fifth-generation mixed farmer in the Atherton Tablelands in northern Queensland, Bradley Jonsson said he has grown two cotton crops in the two most extreme seasons that he has seen in 30 years.

“We have had two pretty challenging years since we started growing it, one of our wettest in 2021 with 1.4 metres of rain falling, and in 2022 the crop was just gone with only 400 millimetres falling.”

He said this has not dampened his enthusiasm for the crop in his region.

“We strongly believe cotton has a fit in the north.

“Farmers have proved that it can be grown even on the back of two challenging years.

Mr Jonsson said despite the setbacks, he still achieved an average of four bales per hectare in dryland and 7-10 bales/ha under irrigation. In an extreme, variable climate that can change from paddock to paddock, all growers agree they have no choice but to work with the weather instead of around it.

Mr Bolton said due to the weather, the planting window is much narrower than for southern growers.

“We probably get 7-10 days a year in our planting window to plant our cotton.

“We plant in February in the wettest month.

“The reason why we need to plant in February is we then have maximum radiation and the best temperatures in April and May for boll filling.”

Based in the NT, Northern Cotton Growers Association president and Tipperary Group farm manager, Bruce Connolly, said with this short planting window, not much gets in the way of getting the crop in the ground.

“During planting, we have such a short, tight window we plant 24 hours a day rain, hail or shine,” Mr Connolly said.

“You can have two or three inches of rain in the shift, and you haven’t stopped.

“The only reason we will stop is because the tractor slides off-line on a greasy hill or something like that. 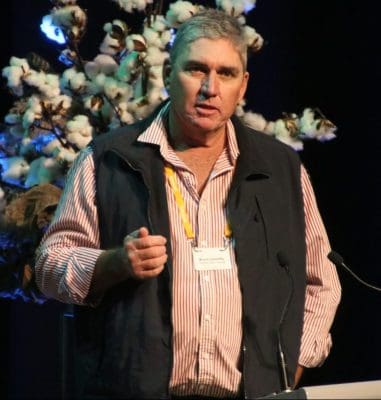 Agronomist Greg Nicol told the conference in the separate Getting more from raingrown cotton session, that weather was not the only hazard of northern cotton growing.

Usually based at Dirranbandi in south-west Queensland, he has spent four seasons at Douglas Daly in the NT.

Mr Nicol said, in his experience, he has never seen the variety of insects and animals in the crop that he witnessed in the north, from bird’s nests, huge numbers of redbacks, snakes and buffalo.

“We must be doing something right,” Mr Nicol said.

“It is pretty unique some of the things we do see up there.”

Although not on the paddock, Mr Connolly told the conference of an encounter one of the Tipperary workers had following a 14-hour cotton picking shift.

He said this worker was driving back when he accidently drove over a 4.5m saltwater crocodile.

“The croc ran back and there were 40,000 teeth coming back at him, mouth open, and as it shut its mouth, it sprayed croc saliva and water all over him through the window and hit the door.” Greg Nicol said buffalo were a rare but not unheard of visitor to the Douglas Daly cotton crop. Photo: Greg Nicol

After years of hard work, Mr Bolton and Mr Connolly are now reaping the rewards of seeing the hectares grow to a level where gins in the Ord and NT are now an economic imperative.

While planning is progressing for the Ord project, Mr Connolly said the Katherine gin will be up and running by harvest next year.

“I am holding back 100 modules to put through that for a commissioning of the gin later this year and early next year.

“We look like being able to switch it on 1 July next year.”

He said without a gin, Tipperary was trucking cotton to Dalby which equated to about 180 triple road train trips.

He said this task meant that the trucks were travelling about 3500km which is approximately “15 times around the equator”.

Mr Connolly said NT growers are also hoping that the new gin will open up new possibilities to ship bales directly out of the Port of Darwin.

“When the cotton gin becomes operational next year, we currently have 200,000 cotton lint processed bales worth of empty space being exported out of Darwin as empty containers.” 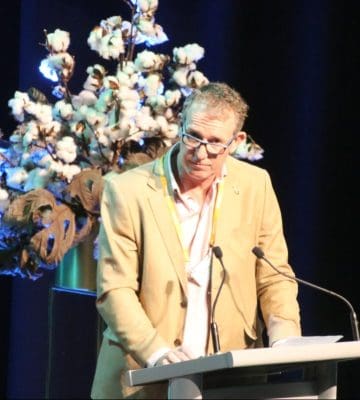 He said currently the of containers out of Darwin is over double the cost of sending product from Brisbane; however, the industry is working to try and close this gap.

“It makes sense if we produce it up there to get it out of Port of Darwin.

“We are also doing some work in the background around that too.”

Looking to the future, all northern cotton growers and agronomists agree that to be successful they need to be open to continuous change their practices and expectations.

“What we are doing now is probably going to change in five years,” Mr Nicol said.

“Nothing we are doing is perfect, but we like to think we are getting better at it each year.”

Mr Jonsson said thanks to the strong level of interest from growers, there will always be new ideas and ways to improve the crop.

“There are heaps of room for improvement, so we are always looking and changing.”

Mr Bolton said “nothing is off the table” in his endeavor to make Ord agriculture a success, from technology to agronomy.

Mr Bolton said over his time growing cotton and other crops in the north, industry pioneers have worked to create strategies to cope with the weather extremes and ensure the industry thrives.

He said, “cover crops are key” and should be cultivated better than the cotton crop.

“It should be seen as the most important part of growing cotton.

“We should be planting it first and it should be looked after better than the cotton.”