WA growers Garren Knell, Megan Gooding and Ashley Wiese are producing specialty crops of wheat-free oats on their farms in the Narrogin area.

A TRIO of innovative farmers in Western Australia has created a production niche growing wheat-free oats for the burgeoning health food market.

Under the partnership banner of Three Farmers, growers Ashley Wiese, Megan Gooding and Garren Knell are producing the specialty crop on their farms in the Narrogin area.

Mr Wiese, who is also Grain Industry Association of WA (GIWA) chair and GIWA Oats Council chair, said the protein in oats was avenin, which was a different protein to that in wheat and barley.

The critical aspect of growing oats for the wheat-free market was to ensure there was no contamination from wheat or barley.

That required stringent growing protocols which included a long rotation that excluded wheat or barley in the lead up to an oat crop.

“We don’t grow any wheat-free oats unless the paddock has had a series of years without any barley or wheat in the system,” he said.

“We use clean seed that is graded especially to make sure there is no wheat or barley contamination. We are bulking up our own seed and hand roguing it (taking out any contaminant seeds) to absolutely make sure it is clean.

“We hand rogue the paddocks it is grown in twice and do inspections as well to make sure there are no contaminants.”

Mr Wiese said there were also cleaning protocols for all the machinery, storage and transport systems involved in the production of wheat-free oats.

“We are harvesting it with clean headers and storing it in separate storage facilities where each silo is tested for gluten,” he said.

Protocols are also in place for processing the grain which is undertaken by UniGrain, which has processing facilities in WA and Victoria.

The Three Farmers partnership was initially set up a few years ago to produce quinoa for the supermarket trade. 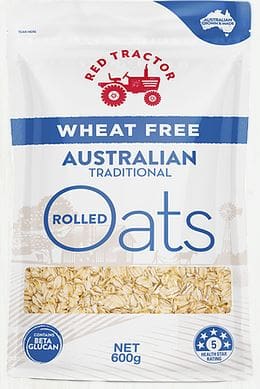 That business model provided a ready-made template for developing the wheat-free oats business which taps into the same supply chain and marketing channels.

“Through our venture into quinoa and getting it retailed into Coles supermarkets we have established a supply chain into the health food market, so we are able to draw on that supply chain to get the oat venture up,” Mr Wiese said.

Three Farmers has engaged with Melbourne-based health food brand, Red Tractor, to supply its products to the market.

“The nice thing about our partnership with Red Tractor, which is Annex Foods in Melbourne, is it opens us up to their distribution networks which go through Asia and the US,” he said.

Mr Wiese said while their wheat-free oats currently go into the domestic market, they were hoping to expand into overseas markets as well.

“The domestic market looks like it is going to grow considerably next year, but we are pending some expansion into other countries,” he said.

“With oats products generally being well received because of the health benefits of oats, we see our product going into a lot of other oat products including oat milk because of its wheat-free status.”