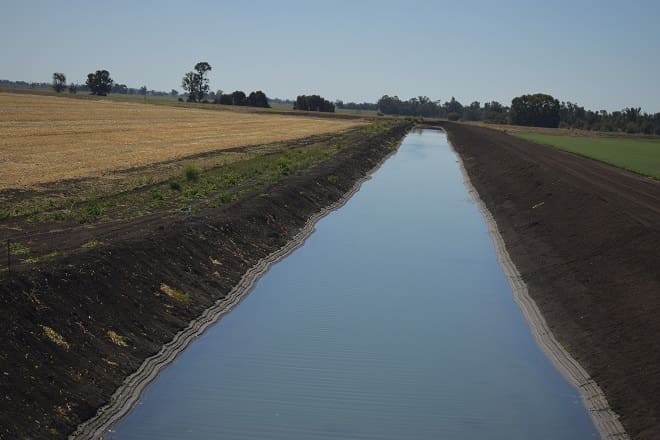 IRRIGATORS in the Murray–Darling Basin (MDB) faced a challenging year in 2019-20 due to water scarcity and low allocations following persistent drought up until late 2019, according to the Australian Competition and Consumer Commission’s (ACCC) eleventh annual ‘Water Monitoring Report’.

The ACCC monitors regulated charges and compliance with the water rules by infrastructure operators and Basin state governments.

The report relies on information being provided by the relevant organisations after the water year ends.

“While the drier conditions and low allocations in 2019-20 resulted in the lowest volume of water delivered by irrigation infrastructure operators for at least five years previous, the recent flooding has shown how conditions can change dramatically in a relatively short time,” ACCC deputy chair Mick Keogh said.

However, the arrival of above average rainfall from January to April 2020 across much of the MDB created favourable conditions for winter cropping.

Under the rules governing water trade, if an irrigator wishes to permanently trade their water to someone outside their irrigation infrastructure operator’s network, they can undertake a process called ‘transformation’ to turn it into an individually owned water access entitlement.

Central Irrigation Trust and Murrumbidgee Irrigation accounted for 79 per cent of the total number of transformations.

“Given the increasing reliance on water markets, it is encouraging to see irrigators transform their irrigation rights into a water access entitlement, providing greater opportunities to participate in both entitlement and allocation markets outside their irrigation network,” Mr Keogh said.

In preparing this report, the ACCC prepared typical bills which estimated annual charges for end water users, such as irrigators, for specified volumes of irrigation right and water delivery scenarios.

In 2019–20 the ACCC found overall modest increases in the majority of typical bills for both on-river networks and irrigation infrastructure operators.

Over the past 11 years, for irrigation infrastructure operators the total aggregate typical irrigator bill change was an increase of around 6 per cent in real terms.

“The estimated bill impacts were in line with expected movements, given price determinations and charging structures and this provides some stability for irrigators,” Mr Keogh said.

Complaints and enquiries regarding the Water Market Rules 2009 and Water Charge Rules 2010 were slightly down from 2018–19 which may partly, be attributed to some stakeholder concerns being considered by the ACCC’s Murray Darling Board water markets inquiry.

The report found that even with the tight supply conditions, total allocation trade volumes increased by 16per cent, from 4.4 to 5.1 GL, the largest volume over the past seven years.

“Irrigators benefit from being able to source water from alternative markets during periods of water scarcity and that shows the importance of a well-functioning Basin water market,” Mr Keogh said.

The ACCC’s water monitoring report uses a range of sources to assess trends in regulated water charges and compliance with the rules.

These include data collected directly from water infrastructure operators and Basin states, as well as information published by government agencies, academia and industry.

Irrigators may hold their own water access entitlements or hold a right to a share of water available under an entitlement held by an irrigation infrastructure operator (such as Murray Irrigation or Murrumbidgee Irrigation) which services a number of customers.

If an irrigator who holds an irrigation right against an IIO wishes to permanently trade that water to someone who is outside that IIO’s network, a number of processes are involved, starting with ‘transformation’.

Transformation can give an irrigator more control and flexibility over their water rights, especially in relation to external trade, but may come with additional costs.

Transformation arrangements are regulated by the Water Market Rules 2009.

Following transformation, the customer can trade the water held under their water access entitlement temporarily or permanently.

These three sets of rules were combined into a single instrument, the Water Charge Rules 2010, on 1 July 2020.