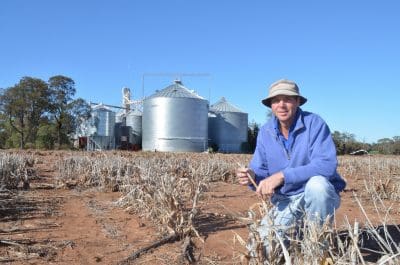 New GRDC chair, John Woods, on his farm at Boggabilla in northern NSW.

The Boggabilla grain grower has been appointed to a three-year term as GRDC chair.

Deputy Prime Minister and Minster for Agriculture and Water Resources, Barnaby Joyce, welcomed Mr Woods to his new role as head of the body responsible for delivering improvements in productivity, sustainability and profitability in the Australian grains industry through world-leading research, development and extension activities.

“As a current GRDC director and the owner and manager of Booroola Pastoral Co, Mr Woods is well placed to take on the position. He not only brings valuable on-farm experience from his 5200- hectare agribusiness covering cropping operations in northern NSW and southern Queensland, but also has professional qualifications in applied science in rural technology and agribusiness,” Minister Joyce said.

“Mr Woods’ leadership and direction will be critical in delivering the best possible R&D outcomes to support Australian grain producers to be profitable and succeed in the highly competitive global grain market. I’m confident that he’s the right person to lead the GRDC through the challenges ahead.”

Mr Joyce thanked outgoing chair, Richard Clark, for the leadership, skills and expertise he brought to the GRDC’s operation since his appointment in 2013.

“During Mr Clark’s time as chair, he has led the corporation to focus more on strategic partnerships, such as that with Bayer, which focuses on development of resistance–busting herbicides,” he said.

“Mr Clark has ensured a smooth introduction of a new board, and recently a new managing director. He has also strengthened regional ties with the roll-out of regional offices across the country and, as an experienced farmer and company director, has brought a deep understanding of the challenges facing the industry.”

Grain Producers Australia chair, Andrew Weidemann, welcomed Mr Woods to the role and said he looked forward to working with him to progress grains innovation across Australia.

Mr Weidemann said the GRDC chairmanship was “a role of significant responsibility”.

“Each year the GRDC invests more than $200 million from a combination of grain farmer levies and Federal Government contribution in research, development and extension.

“The GRDC Chair is responsible for ensuring this investment has the highest possible potential to enhance productivity, profitability and sustainability of Australian grain farmers.”

“Over its 25 years of operation, research commissioned by the GRDC has resulted in enormous productivity gains for growers, including through the extension of new farm technologies, techniques to improve water use efficiency and the support of breeding initiatives.”

“Grain farmers expect that the GRDC will continue to direct levy investment into innovation that will ensure grain remains Australia’s most valuable broadacre agricultural industry.”

Mr Eastburn said the GRDC chair carried much of the onus of meeting these expectations.

During his three years in the role, Mr Clark oversaw the restructure and relocation of the agency to more closely align with farmer needs, the appointment of a new managing director and a milestone agreement with Bayer to develop technical capability in the development of new herbicides for Australian crops.

GrainGrowers and GPA thanked Mr Clark for this contribution and wished him well into the future.

“Industry leadership by bodies such as the GRDC requires significant commitment, which invariability takes individuals away from their personal pursuits.”

“We sincerely thank Mr Clark for his contribution and hope he continues to use his leadership skills for the good of our great industry.”

Mr Eastburn said, in its 25th year, GRDC had a number of challenges and opportunities on the horizon.

“The Federal Government recently passed legislation to see, for the time, transparency over levy-payer details.

“This will mean GRDC will be able to communicate directly with the growers that fund the agency. Such communication has huge potential to better direct research initiatives.”

Mr Weidemann said the governance structure of GRDC was also under consideration.

“In the next two to three years, grain farmers will be asked to considered the structure of GRDC; whether it should remain a Government statutory body or transform to an industry-owned corporation.”

GrainGrowers and GPA will meet with Mr Woods when the three entities come together for a representative organisation consultation in Adelaide this week.