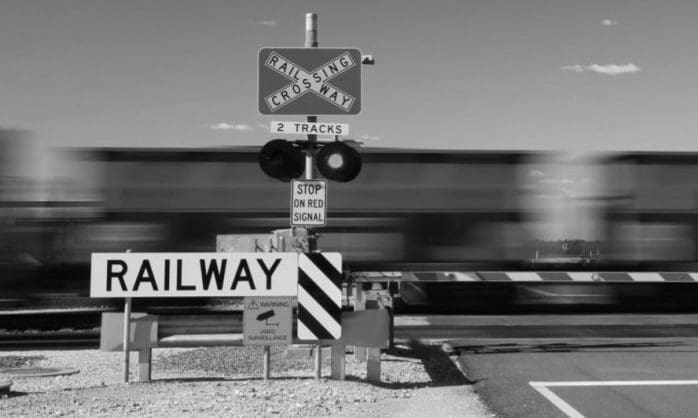 RAIL freight services on a section of the South Western line are suspended after a truck collided with a loaded grain train east of Goondiwindi in southern Queensland at about 3pm yesterday.

The impact caused the Aurizon-owned locomotives and a number of wagons carrying wheat to derail.

A spokesperson for Aurizon said the three people involved in the incident were not seriously injured.

“One of our drivers remains in hospital but is expected to make a full recovery,” the spokesperson said.

“The truck driver was not seriously injured.

“Aurizon is providing support to our train drivers,who were shaken by the incident.”

It is believed the third party-contracted train had been loaded with wheat at GrainCorp’s Thallon site prior to the incident.

Queensland Rail (QR) owns and maintains the South Western line which runs from Toowoomba to Thallon via Warwick in southern Queensland.

It is used primarily for the freight of grain produced in the region.

The 38-wagon train was carrying approximately 1650 tonnes of wheat to the Port of Brisbane on behalf of grower-owned company Thallon Grains, which was loading at the GrainCorp site located near its own.

QR head of regional Jim Benstead said the incident will impact services running on the Goondiwindi to Inglewood section of the line.

“All services through the area have been suspended,” Mr Benstead said.

“The relevant safety agencies have been advised of the incident.

“We will continue to provide updates to the community and our freight partners.”

A spokesperson for GrainCorp said the company is working with QR ensure the line is opened as quickly as possible.

“It’s very early in the clean-up/repair so timelines are tentative, but the current advice from QR is showing the line may reopen in 7-10 days,” the spokesperson said.

“We will be working with QR to shorten the repair and reactivation timeline, to ensure the line is re-opened as soon as possible.”

This incident comes during Rail Safety Week, an initiative of the TrackSAFE Foundation which aims to engage the community in safe rail practices.

This year the event is stressing to passengers, workers and road users the need to play an active role in rail safety, to be aware of their surroundings, and to avoid distractions.

Australian Transport Safety Bureau (ATSB) chief commissioner Angus Mitchell said Rail Safety Week is asking rail workers and users to turn down distractions, take off their headphones and look up from their phones.

“It’s a simple and straight forward message that can be applied across the rail network,” Mr Mitchell said.

“A moment of distraction in or around trains, level crossings and other rail infrastructure can change the life of a passenger, road user, or rail worker forever.”

As an example, Mr Mitchell pointed to an investigation the ATSB finalised earlier this year into a collision between a road train and a freight train at a level crossing north-east of Kalgoorlie, Western Australia, on 22 February 2021.

That investigation found the driver of the road train had been distracted by reaffixing a mobile phone mount to the vehicle’s windscreen before the truck entered an active level crossing.

Unable to stop, the train collided with the road train, derailing the train and seriously injuring the two train drivers.

“Given the size and weight of most trains, the onus to take action to avoid a level crossing collision rests almost entirely on the road vehicle user.

Mr Mitchell said that between July 2020 and June 2021 there were 11 collisions between heavy road vehicles and trains at level crossings across Australia.