WINTER rains and cold temperatures have subdued mice numbers throughout Australia’s cropping regions, but the threat is far from over with populations remaining high enough in some areas to potentially spark a spring outbreak. 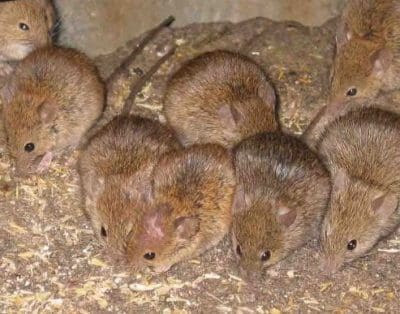 Many cropping areas have suffered damage from mice in plague proportions over the past 12 months, particularly throughout New South Wales and southern Queensland, and parts of Western Australia.

CSIRO research officer and mice control expert, Steve Henry, said while numbers had fallen over winter from the levels at the height of the plague, he was “edgy” about what might happen in spring when conditions warmed up and food sources for the pests became more plentiful.

He said farmers needed to remain vigilant and deal with any mouse hotspots early to prevent a breeding explosion in spring.

“We think that while numbers have plateaued over winter, we haven’t recorded mice disappearing,” he said.

“We are concerned about what might happen in spring, given that we are looking at better-than-average crops. That would mean conditions will be favourable for mice in the spring.

“Before all that food becomes available to sustain breeding populations of mice, farmers need to be walking through their crops looking for signs of damage and being prepared to bait as soon as they see signs of mice.”

Mr Henry said there were still substantial numbers of mice in many regions that had potential to breed up under the right conditions.

In southern Queensland there were reports of mice in big numbers through the mixed grazing/cropping country around Hannaford south of Condamine.

Widespread rains throughout NSW had had some impact on numbers, but also set up ideal conditions for winter crops that would be an abundant food source for mice.

“One farmer at Parkes told us the mice had gone from there, but another said there were still plenty out along the Wellington Road from Parkes. So, we are still hearing of patches,” he said.

“Around Coonamble they said they had disappeared, but then a few weeks ago we started to hear that some farmers thought they were coming back.

“A month ago we were getting reports of high numbers around Rand and Oaklands. Growers were seeing significant damage in pulse crops.”

Mr Henry said mice were still an issue in the cropping regions of Western Australia, particularly in the northern grain belt.

“My phone is ringing hot out of Western Australia at the moment from around Geraldton where they are starting to see mouse damage in developing canola and legume crops,” he said.

The GRDC has produced mouse chew cards which are a highly effective yet simple tool to measure activity in the paddock. These can be downloaded along with more information about mouse control at the GRDC Mouse Control page.