Mouse activity on the rise in eastern, southern cropping regions 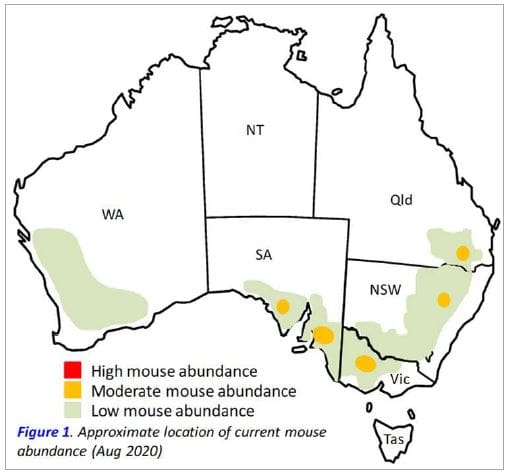 MODERATE mouse activity has been reported in parts of South Australia, Victoria, New South Wales and Queensland, but mouse numbers remain low in many other areas, according to the latest results from monitoring conducted in June/July/August by CSIRO Health and Biosecurity.

Moderate or high numbers of mice at this time of year are of concern because breeding will commence soon, so populations will start at relatively high densities.

Breeding will not commence until the start of spring, but some regions have had good rains and mild winters, and breeding could start early. Mouse numbers are patchy with mouse numbers low to moderate in North Adelaide Plains and western Eyre Peninsula with some reports of mouse activity southern YP, but low elsewhere.

Trap success at Mallala (north of Adelaide) was 1 per cent in June (very low), but another nearby site was 13pc (moderate). Mouse densities were 5-20 mice/hectare (low). Mouse damage could occur on some sites but is patchy.

Mouse abundance is low to moderate (but patchy). Mouse activity is highly variable with some areas moderate in the Wimmera but low elsewhere. Trap success was very low (<1pc) at Walpeup.

Mouse activity is highly variable (low-moderate) depending on paddock. Trap success was moderate at the Darling Downs benchmark site (live-traps 21pc), but chew card activity was generally low on all rapid-assessment sites (Chinchilla to Warwick down to Goondiwindi).

Mouse numbers normally decline through winter, but can still cause economic damage if numbers are high. Crops will compensate for minor damage, but cannot compensate for heavy damage or damage that occurs in late stages of crop maturity.

If concerned, growers should consider management before crop comes into head.

Growers should continue to report mouse abundance on their farms (presence and absence!) using MouseAlert (www.mousealert.org.au) on smart phone, tablet or computer and to check what other mouse activity is being reported locally and regionally.