The introduced pest, fall armyworm, can cause extensive damage to crops, particularly maize and sweet corn.

BENEFICIAL insects that prey on crop pests are being enlisted into integrated pest management (IPM) programs as one of the few effective options for helping control the exotic pest, fall armyworm (FAW).

The natural predators are playing an important supporting role in strategies to contain the pest, and some farmers are even deploying extra batches of commercially-bred beneficial insects to supplement the natural populations.

FAW, which arrived in Australia last year and has spread throughout the nation, is proving difficult to control with traditional spraying technologies. In vulnerable crops such as maize and sweet corn the pest hides deep within the whorl, shielded from contact with insecticides.

Queensland Department of Agriculture and Fisheries principal entomologist, Dr Melina Miles, said natural insect predators had the advantage of being able to track down FAW eggs and larvae hiding within the leaves and whorls of the plants.

“The thing about FAW is that it is just so hard to get insecticide to where the larvae are for a long period of the crop’s growth, whereas the natural enemies can get there. They can find the eggs and larvae down in the whorls. They can also find pupae which are life stages that we are really challenged by in terms of applying conventional chemistry like we are used to doing with all the other pests,” she said.

Dr Miles said one of the keys to controlling FAW was to get in early and contain initial infestations, otherwise pest populations could build up significantly over time. Natural predators had a role to play in that early suppression.

“If you don’t get good control of the very first infestation the larvae that go on to produce moths stay in the crop. So, over time you might get two, three or maybe four generations. By the time you get to the fourth generation it is quite big and very damaging,” she said.

“We know that the contribution of natural enemies suppresses that at every opportunity. It may not be economic to apply insecticide to a low population. But, if you don’t get some level of control the subsequent populations will be substantially bigger. That is where natural enemies come in. They play an important role at every turn.”

Their main product for fighting FAW is Trichogramma pretiosum eggs which turn into minute wasps that parasitise the eggs of caterpillar pests.

The Trichogramma eggs are batched into cards which are mailed overnight to producers for putting out manually into a crop, or left as free-standing eggs to go out through drones and planes.

Bugs for Bugs director Paul Jones said they aimed to produce Trichogramma in their insectary when the time was right to put them out into a crop.

“We try to time it so the eggs hatch within 6 to 12 hours after release. The clients receive the product as parasitised eggs near ready to hatch out,” he said.

“Within four hours, the wasps are viable and ready to lay their eggs into the eggs of heliothis, loopers and fall armyworm.

“They are such a tiny wasp they will manage to get within the egg cluster of fall armyworm and lay their eggs within the eggs. They will feed on the contents and out of the egg will hatch Trichogramma.” 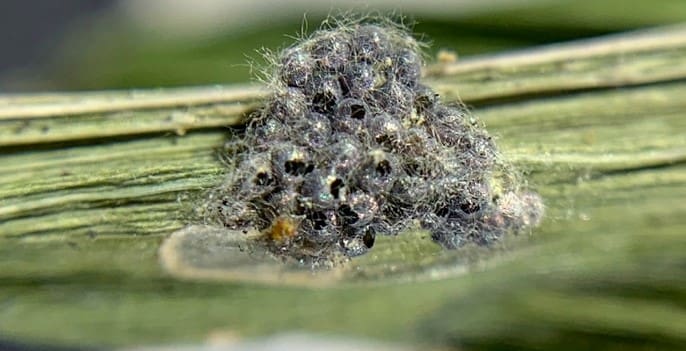 Mr Jones said 90 per cent of the business’s clientele were conventional farmers who were using beneficial insects as part of their IPM strategies.

“We try to guide growers with potential bio control solutions and integrated pest management solutions. We are not discounting the use of sprays, but are trying to minimise the use of sprays and encourage as many beneficials as possible to help control the pest,” he said.

“Part of the big picture is to attract the natural beneficials from the environment. Nature is your insectary. Where we come in is just adding to that insectary.

“Timing is critical. If we can get the bugs out a little bit earlier than the bugs that naturally come in that gives us a head start to get on top of the pests. We are just adding to it.”

While adding beneficials doesn’t always do the job, Mr Jones cited an example of a farmer in southern Queensland who attributed beneficials with virtually saving a crop.

“We had a maize grower at Cooyar who didn’t spray at all and got excellent results with very little damage. He had had prolific levels of beneficials. Visually you could see lots of parasitic wasps, ladybirds and lacewings. On top of that we released Trichogramma pretiosum wasps to help,” he said.

Dr Miles said whether it was worthwhile for broadacre growers to rely on beneficials to control FAW, or add extra numbers, was a matter of “horses for courses”.

“For the northern regions where they are experiencing really high FAW pressures over the life of the crop it is hard to see that the natural enemies, on their own, will have a big impact just because the FAW numbers are so high,” she said.

“For the rest of Australia where we see lower levels of pressure, natural enemies have a more significant role because it is likely those are the FAW populations that are sub-threshold to start with but build over time.

“If we can get some biological control in the early generations then the pressure won’t be as high on those crops that are subjected to later-season pressure.”

Dr Miles said one of the most exciting developments in the control of FAW was access to the biopesticide, Fawligen – one of the few insecticide options for controlling FAW that didn’t impact natural enemies. The biopesticide is a naturally occurring caterpillar virus. It targets the FAW caterpillar which ingests virus particles, becomes infected and dies, spreading the virus to other FAW larvae in the crop.

“Fawligen is available under permit for use in a wide range of crops, broadacre as well as horticultural,” she said.

“Sweet corn in the north is getting Fawligen quite regularly in conjunction with other insecticides. In Kununurra it has been going out into the maize.”

Dr Miles said Fawligen was effective at taking out small larvae which meant it had to be applied early.

“For that reason it will take some education of growers, particularly growers who have never had to manage insects in their crops before. That is the majority of maize, silage maize and forage sorghum growers,” she said.

“Telling them they need to get this product on before the larvae get past about second instar, which is about five days, is a really big ask.”

Dr Miles said FAW numbers had fallen away in southern regions over winter but remained active in the warmer northern areas.

“In north Queensland and the northern coastal areas it is still there. From Mackay north, winter doesn’t have a major impact. It slows them down a little bit but not a lot,” she said.

“In a trap at Bundaberg in the last week we got about 1000 moths. It was adjacent to a sweet corn block. So, conditions in that environment are still suitable for FAW.

“Unlike this time last year, which was the first year (of FAW infestation), the numbers were extremely low in those areas. Now we have a much higher starting point. So, things we were saying last year like “plant your crops early to avoid high pressure” don’t apply quite as well this year.”

Dr Miles said FAW had disappeared over winter in the majority of maize-growing areas from Central Queensland to northern New South Wales, because there was no maize and no other hosts.

“Whether that means they have left the environment or whether they are ticking along in a non-crop host we don’t know,” she said.

“They haven’t turned up in winter cereals in any big way. I suspect it has been too cold for them to persist, plus there has been an absence of hosts.

“It remains to be seen in other growing areas whether we will see migrations like we saw last year that start the population off again, or whether it will come from a low-level local population.”

HIGH-TECH drones are being used to survey maize crops in Western Australia’s north for the new invasive pest, fall armyworm, to improve monitoring and provide an early warning detection tool for growers.

The WA Department of Primary Industries and Regional Development (DPIRD) has joined with the Ord River District Co-operative (ORDCO) to survey six maize crops in the Ord River Irrigation Area during the growing season between May and September.

Fall armyworm was first detected in Kununurra in March 2020 and has since become established in Broome, Carnarvon and Gingin.

The voracious pest can cause significant production losses to grass crops, such as maize, sweet corn and sorghum, and is known to feed on more than 350 plant species, including other grain, fodder, fruit and vegetable crops.

DPIRD senior research scientist Helen Spafford is leading the project and said the images and data from the drones would provide scientists and growers with a better understanding of how fall armyworm behaved in northern conditions.

“The program is surveying six paddocks in the Stage One and Two and Packsaddle areas to assess the pest’s spread over time,” Dr Spafford said.

“The first flight in late May found that the drones and the software could pick up the characteristic feeding damage of young fall armyworm in young maize crops, which suggests that we can find these infestations early across large areas.

“We are interested in the data captured by the drones and whether it reveals any patterns in the relationship between fall armyworm colonisation and plant health in the field, which could aid management and control measures.

“The project is also using Normalised Difference Vegetation Index, or NDVI, data collected from satellites to assess plant health in each paddock.”

The drones, which are flown 15 metres above the crop, capture high resolution images that are then run through processing algorithms to identify insect damage to leaves.

“The technology may be very useful to identify fall armyworm hot spots so growers and agronomists can make informed decisions about control measures before numbers build up and spread,” she said.

“This project provides a unique opportunity to prove up the use of drone technology to monitor invasive species, which could also be used for other pests, weeds and diseases.”

ORDCO senior agronomist Penny Goldsmith said the co-operative was pleased to be involved with the drone monitoring project, which she said could pave the way to improved crop protection and productivity.

“Drones could prove to be a useful addition to our control armoury to refine management strategies and protect crops more effectively, reduce control costs and adapt farming systems to optimise yields and profitability,” she said.