A WORLD-CLASS cropping research station is set to be established on Queensland’s Darling Downs with the announcement today of an $11 million investment in a new grains research facility on a farm on the Condamine River at Yandilla south-west of Toowoomba. 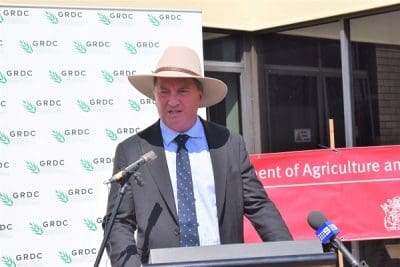 Deputy Prime Minister and Minister for Agriculture and Water Resources, Barnaby Joyce, announcing the $11 million investment in a new grains research facility on the Darling Downs.

In a unique arrangement, the 740-hectare property was acquired from owners, Glen and Diane Elsden, through an industry trust, Grains and Cropping R&D Trust, under a co-investment between the Grains Research Development Corporation (GRDC) and the Queensland Department of Agriculture and Fisheries (QDAF).

The property and research facility will be operated by the trust on behalf of Australian grain growers.

“This world-class grains research facility will have high relevance to the cropping sector as it is located in one of the country’s prime agricultural areas, in close proximity to established scientific research institutions,” Minister Joyce said. 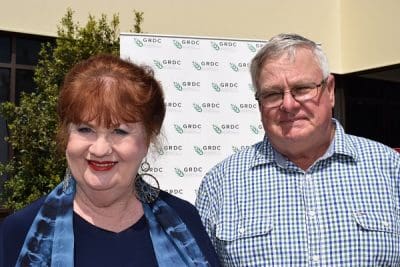 Diane and Glen Elsden, former owners of the farm at Yandilla that will become the new cropping research centre.

“Australia has world-class grain growers, but what this facility will do is focus on issues like new technology, crop genetics and weed control, to boost growers’ farmgate profits and bolster our competitiveness globally.

“The location of the research facility will allow for both summer and winter farming systems trials that are relevant not just to Queensland grain growers, but nationally.”

Minister Joyce said it was critical that Australia stayed at the cutting edge of agricultural research in a world of rising population and food demand.

“The only way we can get on top of that is to do what they did with the ‘green revolution’ from 1946 to 1963 when Mexico increased grain production six-fold. We have gobbled up the ‘green revolution’. The population has grown to it. We now need to take the next step, and this farm will be instrumental in it.”

GRDC chairman, John Woods, said the investment was the first in generations that would see a ‘greenfield’ research farm established in Australia. 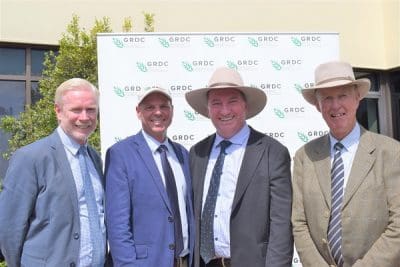 “Not only is that extraordinary, but between the three players – the Federal Government, QDAF and GRDC – it will be put in industry hands so it endures. Nobody can sell it, nobody can play with it, nobody can tinker with it. It is in a trust so it will endure for many generations,” he said.

“It also opens the door for more collaboration. The GRDC doesn’t do R&D in our own right, we rely on other partners aligned with our growers’ interests.

“One of the strengths of this farm is we will be able to do a lot more and collaborate with more partners. This is a collaborative opportunity between agencies and industry and we look forward to it enduring into the future.

“Strategically, this investment is in close proximity to established Queensland Department of Agriculture and Fisheries grains research centres in Toowoomba and Warwick, along with key research partners like the University of Southern Queensland (USQ), University of Queensland (UQ) and CSIRO.”

Mr Woods said the property had significant on-farm water storage, along with bore and river irrigation options, which provided the water security to broaden the scope and reliability of research options.

“The reason we have chosen this type of facility is we need enduring R&D. You cannot turn R&D on and off. You need to establish long term trials. Because it is an irrigation farm, we will be able to establish crops and trials every day so we don’t get sequences where we have to drop out of production,” he said.

QDAF acting director general, Malcolm Letts, said the new facility would become the centre of a range of research projects.

“Some examples of the work we will do on the property include jointly-funded efforts in mungbeans, chickpeas, forage oats breeding. Genetic discovery in pre-breeding activities with barley and sorghum will also be undertaken,” he said.

“Other institutions we partner with will no doubt be undertaking wheat, durum, sunflower and maize research.

“Our research into integrated pest management, weeds and herbicide resistance management, and improved disease prediction and management will be moved onto the farm within the next few years.”