It is expected that rail will be a major focus of the Western Victoria Grain Industry Supply Chain Study. Photo: Victoria Department of Transport

THE SOUTHWEST Victoria Alliance will be leading a new study into the region’s grain supply chain.

The $250,000 Western Victoria Grain Industry Supply Chain Study will identify changes to production and the volume of grain likely to be harvested and transported over the next 25 years.

It will also assist in freight-industry efficiencies and improve the competitiveness of the grain industry.

The SouthWest Victoria Alliance is a partnership between the Shires of Colac Otway, Corangamite, Moyne, Southern Grampians and Glenelg, the City of Warrnambool and local business leaders.

The Alliance will deliver the project, along with local government, industry and input from the Department of Transport.

Victorian Minister for Ports and Freight Melissa Horne said the state government will contribute $125,000 in funding for the study.

“We know how important the grain industry is, which is why we’re investing in this study to keep the grain supply chain moving – not only now, but well into the future,” Ms Horne said.

“The study will prove vital in developing a safer and stronger road and rail freight network, delivering long-term freight efficiencies and benefits to the industry.”

The new project is modelled on the Dairy Supply Chain Study which was undertaken in 2018. 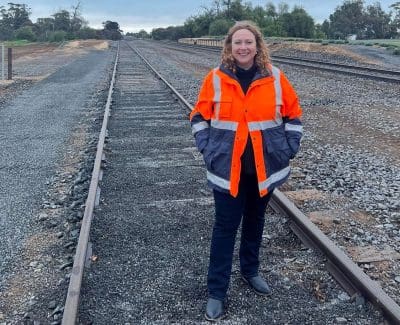 The role of rail in the grain industry supply chain will be considered, along with opportunities to increase its share in the freight task.

Existing grain silos will also be mapped and examined, while optimal locations for new ones will be identified together with sites that could benefit from additional intermodal hubs.

Other areas of focus will include projected routes, including transporting grain from farms to grain-receival centres and viewing the supply chains from processing and manufacturing facilities to key export gateways.

The Victorian Government’s $125,000 investment for the $250,000 project is being funded through the Flexible Local Transport Solutions Program, which supports evidence-based transport and freight studies that can inform investment decisions leading to the more efficient movement of freight at local levels.

The remainder of funding for the project will come from Great South Coast, Wimmera Southern Mallee and Central Highlands Regional partnerships and associated Local Government Authorities in the region.

Will rail be the key?

With an average 650-metre long fully loaded grain train able to carry the equivalent of 50 loaded trucks, the Western Victorian rail network would likely be a key focus of the study.

The ongoing Murray Basin Rail Project (MBRP) is the backbone of the Victorian freight network.

Ms Thorne last month announced the competition of upgrades to freight lines which fall within the MBRP works.

The upgrades were to the Mildura, Sea Lake and Manangatang lines which freight grain as well as fruit, wine and pulses from growing regions to the port.

The works included the installation of more than 170,000 new sleepers, the addition of over 30,000 tonnes of ballast to the track and maintenance on more than 8000 joints between pieces of rail.

Ms Thorne said the works now also pave the way for 29 kilometres of temporary speed restrictions to be removed on the Manangatang line, slashing travel times for freight trains by 20 minutes.

“We’re improving the freight network and ensuring we’re continuing to support our freight operators and farmers by completing these works across the across the Mildura, Sea Lake and Manangatang lines.”

She said the Sea Lake line works will also play a pivotal role in improving the flow of grain ahead of this season’s harvest.

It also saw speed restrictions removed to grain terminals in Sea Lake and Nullawil to boost reliability and capacity and remove more trucks from local roads.

“We’re continuing to support our freight operators and farmers by completing these works on the Sea Lake line – ahead of what is expected to be another bumper harvest.”

“The works are all about making it safer, faster and easier for freight operators and farmers to keep transporting thousands of tonnes of grain to port.”

Victorian Nationals leader and Shadow Minister for Agriculture and Regional Victoria Peter Walsh called out the “outrageous claim” that these works are making it “safer, faster and easier” to get Victorian food and fibre to port.

Mr Walsh said the works which form part of the MBRP actually resulted in longer travel times and a lower maximum axle loading which was dragging down productivity and profitability.

“Labor’s decision to install century-old track on the Basin Rail network and to leave it a mess of standard and broad-gauge lines means it’s now harder – not easier – to get Victorian food and fibre from north-west Victoria to the port at Melbourne,” Mr Walsh said.

“Stakeholders tell us that freight trains are taking five hours longer to make a trip because of the problems with Labor’s botched mismanagement of the [MDRP].

“The Basin Rail is crucial for transport of fruit and vegetables, wine, grain and mineral sands from the Sunraysia and Mallee regions down to markets in Melbourne and across the world.

“Finishing it – in full – is the only way to deliver safer, faster and easier access to the port and also take thousands of truck movements off our crumbling country roads.”

One-million tonnes of grain valued at $400 million was moved to port by more than 530 bulk grain trains on the freight rail network from July 2021 to April this year from 29 active grain sites.