THE NEW SOUTH Wales Government has this week introduced $190 million in transport subsidies to help farmers cover the cost of trucking fodder, water and livestock as they struggle through a drought which now grips 99 per cent of the state. 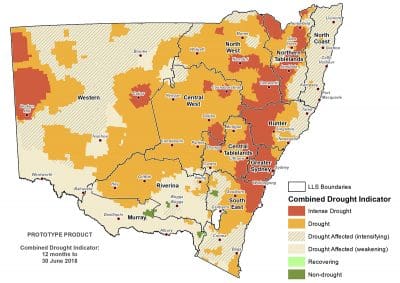 Four small pockets of southeast NSW are the only parts of the state not in drought. Image: NSW Government

The subsidies will cover up to 50pc of the full cost of transporting grain, hay and other fodder for livestock, or trucking out stock to agistment, sale or slaughter, with a cap of $20,000 per farm business.

The funding is part of a $500-million Emergency Drought Relief Package announced by the NSW Government this week, and the relief measure will allow farmers to access subsidies for freight expenses incurred since 1 January.

NSW Premier, Gladys Berejiklian, said farmers were facing one of the driest winters on record, resulting in failing crops, drastic water shortages, and a diminishing supply of fodder to sustain livestock.

The NSW Government earlier announced funding of $584m, which was largely focused on preparation for drought conditions.

“However, conditions are now so dire that further support is needed to address the more immediate needs for farmers and their communities until the drought breaks,” Ms Berejiklian said.

Deputy Premier and Minister for Regional NSW, John Barilaro, said the drought had quickly worsened across the state because June and July were drier than expected, and farmers had been forced to source fodder from interstate as local supplies deteriorated.

“We have backdated this relief measure to the start of the year when the drought intensified, especially in the Upper Hunter and western NSW,” Mr Barilaro said.

“This means eligible farmers who made the decision to destock earlier this year will still benefit from this new relief package.”

“We know many families are having to bring in water for domestic use, which is why we have set aside additional funding for this essential service,” NSW Primary Industries Minister, Niall Blair, said.

“The expansion of the drought transport subsidies to cover a range of transport activities recognises that good animal welfare practice covers a variety of activities and requires long-term planning,” Mr Jackson said.

“The decision to provide back-payments to 1 January recognises that planning for drought happens before the country is dry.”

Mr Jackson said the package’s inclusion of waivers on some NSW Government fees showed would benefit local communities and contractors, as well as farmers.

“NSW Farmers has been a strong advocate for the Farm Innovation Fund. It has helped farmers to prepare for drought, through the cessation of interest payments on existing loans, as well as future loans, the government has recognised that there is only so much you can do to prepare.”

As farmers continue to make tough decisions, we call on the NSW Government to make it equitable and as easy as possible for them to access relief.”

Eastern Australia’s drought is not confined to NSW, and parts of Victoria and South Australia have crops which are underperforming due to a lack of in-crop rain, and livestock which is being hand-fed to make up for the lack of pasture growing in paddocks.

As of 2 July, the Queensland Government had drought-declared 57.4pc of the state, with central western, central and southern regions the worst affected.

Details of the package are available at www.droughthub.nsw.gov.au