Rosie eyes off lunch in the cab during sowing at Crystal Brook in Australia’s Mid North. Photo: Linden Price

ONGOING inflationary pressures, a weaker global economic outlook and the prospect of a wet winter across many production regions of Australia is causing volatility for the agriculture sector.

That’s according to NAB’s May Rural Commodities Wrap, which reports that despite the current conditions, the bank’s Rural Commodities Index* is on track for a 2 per cent rise in May, taking it to another record high.

“La Niña is kicking on longer than expected and a negative Indian Ocean Dipole (IOD) is likely to bring above-average rainfall for much of the country this winter, with the notable exception of Western Australia’s wheatbelt and south-west Tasmania,” Mr Ziebell said.

“This presents an upside for the 2022-23 Australian winter crop but increases risks to global grain production.”

Mr Ziebell said while Australian farmers will likely benefit from these circumstances, global food security risks are an increasing challenge.

“Global grain prices continue to skyrocket, driven by a confluence of challenges.

“Russia’s invasion of Ukraine, drought in Germany and France, drought across parts of Africa, a ban on Indian wheat exports and very mixed conditions in the Americas have all conspired to push prices higher.

“Stocks are unevenly distributed – around half the world’s wheat stocks are in China – which limits the ability to draw down supplies to meet demand. The world needs grain and Australia will be a key source of it in the coming year.” 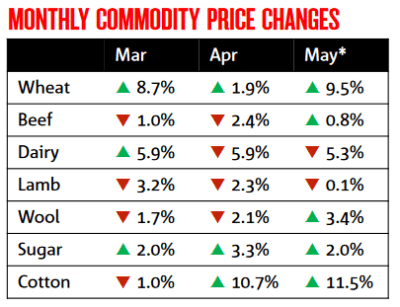 “Overall, our fertiliser index was up another 12.5% in April, over double its level from just one year ago,” Mr Ziebell said.

“While United States dollar (USD) denominated diammonium phosphate (DAP) and urea have dropped somewhat in recent weeks, we do not expect much downside this year.

“The World Bank reports that global fertiliser affordability is at historically low levels, which were last seen in the 1970s and only surpassed during the global financial crisis (GFC) period between 2007 to 2009.

With ongoing inflationary pressures making central banks including the US Federal Reserve more hawkish, the USD is rising.

“Combined with ongoing COVID-19 lockdowns in China, this presents higher volatility risks for the AUD.”

“The AUD dipped below US 70 cents earlier this month and we see the currency at around US 72 cents by the end 2022.”

NOTE: * The NAB Rural Commodities Index is based on the price and production data for 28 commodities and is weighted by their relative size in Australia’s agricultural sector.