Pickers round out 2.8-million-bale cotton season AUSTRALIA’s cotton harvest is wrapping up with the last of the picking in southern New South Wales likely to bring total production for the season to 2.8 million bales.

“Most people say it was 10 to 15 per cent better than what they thought it would be, which has been a pleasant surprise,” he said.

“Generally, the quality has been very good. Unfortunately, some of the Riverina has experienced low micronaire because it was a cooler season.

“That was wonderful for a lot of the hotter areas, but for the Riverina it has led to low micronaire cotton.

“In a way that has been made up for by the better-than-average yields, but it is still a nasty shock to see a discount come through on your cotton.”

Mr Kay said cotton grown in the emerging areas of northern Australia had been picked and was being trucked thousands of kilometres for ginning at St George and Dalby in southern Queensland.

“The key to northern Australia is going to be the development of the cotton gin at Katherine. That will enable more people to grow cotton up there. They are suggesting it will be ready to gin next year’s cotton,” he said.

Mr Kay said widespread rains in recent months had created substantial inflows into water storages and set the industry up for a promising 2021-22 season.

“Our estimate for next season’s crop is 4.0 million bales plus, and firming with every fall of rain across the various catchments,” he said.

“In many areas it is looking like another good winter cropping season, and there has been a lot of run off into on-farm storages and the major storages are filling.

Meanwhile, the United States Department of Agriculture has reported that China has begun its 2021 round of sales from its cotton State Reserve (SR).

The sales program was not completely unexpected, but the official announcement of the sales was made just days before sales started on July 5.

The USDA said rumours of imminent sales had been circulating in the market for several months, and Reserve sales in past years had tended to begin earlier in the year.

The announcement indicated that 600,000 tons (2.75 million bales) would be made available through the end of September, which represents about 20 percent of the estimated total held by the SR.

The announcement indicated that sales would be limited to 2011/12/13 domestic stocks. 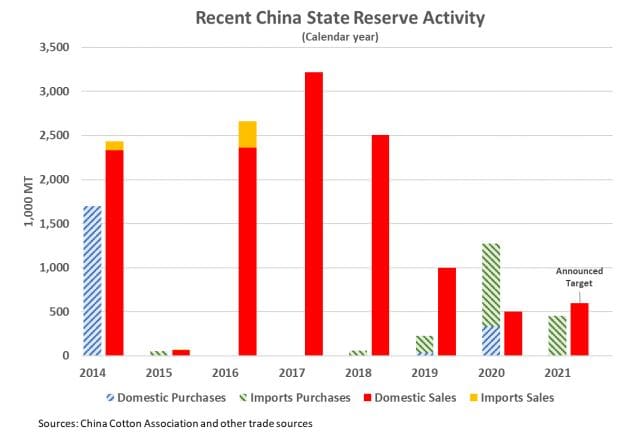 This year’s sales mechanism is similar to previous years. Lots are offered every business day through an electronic auction platform. Minimum reserve prices for each lot are set based on domestic and international prices in addition to quality adjustments.

An additional mechanism was introduced this year – if domestic prices drop by more than 3.5 cents/lb in a three-day period, sales will be suspended until prices recover. Just under 10,000 tons have been offered each day.

These sales are part of a policy to rotate cotton held in the SR and will be partially offset by foreign cotton acquired by the SR in late 2020 and early 2021. Even if the entire 600,000 tons is sold, the size of the SR will increase this year as the amount of cotton acquired since the 2020 sales is believed to be more than the potential 2021 sales.

Over the last three years, the size of the SR has fluctuated around 2.75 million tons, roughly the amount that would be held if this season’s sales are robust.

As with previous years’ sales, early sales have been very strong with 100 percent of the amounts offered being sold in the first week. This is similar to recent years’ auctions which also showed very strong early season sales.

China announced in May that 700,000 tons of Sliding-Scale import quota would be issued later this year; industry expectations are that the licenses will likely not be issued until after the SR sales end but before the arrival of the 2021 crop. Therefore, the volume of 2021 SR sales will largely reflect the current level of demand for cotton in China.