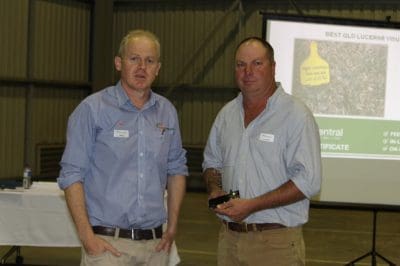 Hay producers from Glenore Grove, Jandowae, Inglewood and Chinchilla have been named as Queensland’s best hay makers for 2015-16.

The winners of the Feed Central National Hay Quality competition for 2015-16 were announced at pre-harvest event in Toowoomba on September 14.

The Victoria, New South Wales and national winners will be announced later this month.

The winners were recognised for the visual appearance and feed analysis tests of their crops.

Mark Wright from Inglewood had the best visual appearance score in the state for a lucerne crop and Ken Schmidt from the Nine Mile Unit Trust at Chinchilla won the visual appearance category for his oaten hay. Mr Schmidt also won the award in 2014.

There were more than 650 lots competing nationally for the awards. In total, 188,258 tonnes were inspected with an average lot size of 289 tonne.

“They help to set a benchmark of quality that will improve the consistency of hay in Australia, which leads to better returns for suppliers and better outcomes for end users.”

The Feed Central National Hay Quality competition is the only competition in Australia based on commercial lots of large square and round bales that are genuinely for sale.

Mr Ford said the quality of hay in Queensland was improving year on year with growers improving their production practices.

He said Queensland’s dry spring in 2015 allowed for some excellent hay to be made and the good growers are managing to mitigate the risks of weather damage.

Victorian and New South Wales events will be held later this month where the national award winners will be announced.

Hay listed with Feed Central in preparation for sale is inspected on-farm by a certified Feed Central inspector and is eligible for entry in the competition.