Qube is buying Newcastle Agri Terminal to give it its second bulk grain port in NSW. Photo: NAT

In a statement, Qube said the total cost would be around $90 million, and the deal is expected to settle on September 30, subject to conditions being met.

In the grain space in New South Wales, Qube already owns the former Agrigrain sites at Coonamble and Narromine, and the Quattro bulk terminal at Port Kembla.

The NAT purchase is seen as “highly complementary” to Qube Agri’s assets, and will be part of Qube’s logistics division.

The terminal’s location enables it to draw grain for export from northern NSW, a region which which has produced an average of around 4.8 million tonnes of grain per annum over the past seven  years.

The NAT facility has modern rail-receival infrastructure, road-discharge facilities and the ability to load out up to 2000t per hour on to ships. 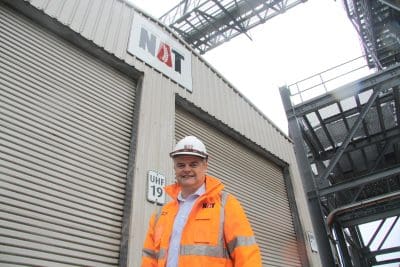 There are no immediate changes forecast for the business, and Qube said the initial focus of the combined business will be to work with the management team to ensure the same high level of service continues for NAT’s customers, and new opportunities followed up.

The NAT terminal was the brainchild of Jock Carter, who saw an opportunity post-deregulation for a second grain-export terminal in Newcastle to supplement GrainCorp’s capacity.

In 2009, Martin MacKay joined Mr Carter in the company CTC Terminals to pitch the proposal to build NAT to stakeholders, and the terminal shipped its first grain in 2014.

“This is great news, and we look forward to working with Qube,” Mr MacKay said.

“Like Jock and myself, they’re a service provider, and we’re looking forward to keeping on doing what we do for our customers.”

The NAT site loads at a berth shared with a minerals exporter, and has 60,000t of silo storage on site.

With this, it loads grain cargoes predominantly ranging in size from around 30,000t to more than 60,000t, depending on the customers’ requirements and capability of the receiving port’s facilities.

Qube’s purchase of NAT means that GrainCorp and Qube will each own one of two terminals at Newcastle and Port Kembla, NSW’s only bulk grain ports.

Qube owns a rail fleet which carries grain and other commodities in NSW, and NAT is expected to continue to be serviced by it and other rail operators which haul grain from country NSW.