Crews cut away a section of the Moama-Deniliquin track to allow a temporary levee to be built to protect the line from more extensive flood damage.  Photo: V/Line

ACTUAL and potential damage to rail alignments caused by widespread flooding in New South Wales has prompted Pacific National (PN) to suspend some services on grain lines until further notice.

The decision has come following a PN grain train overnight encountering a track washaway near Naradhan, north of Rankins Springs in south-central NSW.

Some wagons separated from the locomotive, but remained upright and on the tracks, and will be retrieved when the line reopens, hopefully in coming days. 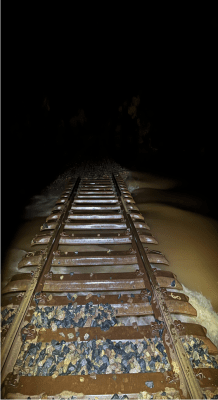 A PN train hauling for GrainCorp stopped last night before it hit this washaway which has closed the line for several days at least. Photo: PN

“The training and experience of the Pacific National freight train crew immediately kicked in, resulting in appropriate protocols being quickly activated to ensure safety on site,” a PN spokesperson said in a statement.

“In addition to track concerns, road conditions in the regions are highly variable with flood-alerts changing several times a day.”

“Pacific National is currently reviewing its extensive operations on the Country Regional Network (UGL Regional Linx) due to flash flooding.”

UGL Regional Linx, which is in charge of the under-rail assets, is meeting with PN later today to assess current network conditions.

As predicted, flooding in the Namoi Valley has forced the closure of the Narrabri-Walgett line near Wee Waa in northern NSW until at least November 3.

The Moree-Narrabri line, which has been closed over winter to allow an upgrade as part of ARTC’s Inland Rail project, appears unlikely to reopen on November 1 as initially scheduled because of the current flood in the region.

However, hopes are high that it will reopen in the first half of November.

In southern NSW, the line between Yenda and Temora is closed because of a minor washaway at Quandary, and a larger one between Ariah Park and Mirrool.

On the positive side, the rail line just south of Forbes at Grawlin reopened yesterday after being closed due to flooding earlier this month.

Despite the enormity of the flood event on the plains of NSW, and in northern Victoria, PN and other operators are still hauling grain to export terminals and domestic consumers on the eastern seaboard.

Victoria’s rail network is operated by V/Line, and numerous lines remain closed due to flooding and water damage centred in the Murray Valley.

Closed rail lines include Bendigo to Deniliquin and Bendigo to Piangil due to flooding and flood risks at Echuca and Moama.

The Shepparton-Tocumwal line is also closed, but could reopen to container freight on Sunday.

Emerald Grain’s Melbourne terminal is on track to receive its first grain on Friday following a shutdown for maintenance and repairs.