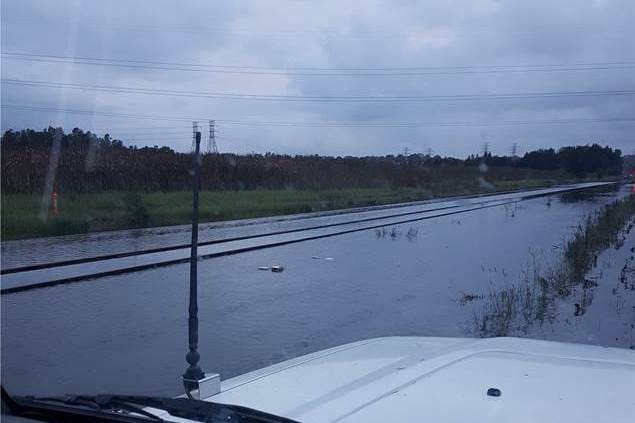 The Hunter rail line just west of the Port of Newcastle has been closed due to flooding. Photo: ARTC

TORRENTIAL rain has cut the Hunter Valley rail line which links the New South Wales grainbelt with the Port of Newcastle, and bad weather is delaying the loading of wheat for export at its two terminals.

The rail line closed on Thursday, and could reopen later this week provided repairs can be undertaken and safety of operations can be assured.

Pacific National hauls grain to Newcastle along the Hunter line. Its agricultural manager Hugh Cox said the line closure had stopped 16-20 trainloads of grain from getting to port.

Each train carries around 2800 tonnes at a time when Newcastle is loading big volumes of wheat while Port Kembla, NSW’s only other bulk port, concentrates on canola to shift the state’s first big export program since 2016-17.

The Australian Rail Track Corporation (ARTC) owns and operates the the Hunter Valley Network between Newcastle and Maitland, and has temporarily closed it as well as the coastal Telarah-Grafton line which does not carry grain.

“High rainfall, potential for more severe flooding beyond the current impacts to the network, strong winds, fallen trees and debris, power failures and fallen power lines and power poles are all concerns which led to operations being halted,” an ARTC spokesperson said.

“Weather events such as these have the potential of damage to our network and increases risks to all those involved in the transport operations.

“When it is safe to do so, we will begin the process of reopening the tracks by undertaking a full assessment of rail operations; however, this will not be until conditions are safe and water levels recede.”

A vessel to load wheat is scheduled to dock at GrainCorp’s Carrington berth in Newcastle tonight, with another one to follow later this week, and the Newcastle Agri Terminal also has two vessels due to load wheat this week.

Grain Central understands the terminals have enough grain on hand to load the vessels, even with the rail line temporarily out of action.

In a statement provided to Grain Central, the Port of Newcastle said it was monitoring conditions and scheduling vessels in close communication with Port Authority NSW.

“Each vessel is assessed on a case-by-case basis for its suitability at the time of each scheduled movement,” a spokesperson for the Port of Newcastle said.

“The shipping schedule is adapted relative to the weather conditions and safety assessments.

“This type of temporary weather event typically does not have any lasting impact on port operations.

“The port continues to operate and is monitoring conditions closely.”

Grain Central understands risks brought about by fog, rough seas and big tides have all made piloting ships into the harbour dangerous in recent days.

On top of this, rain prevents the loading of grain into open hatches when vessels are moored.

“At the moment, everything’s parked; nothing is moving in and out of Newcastle.

“We are looking at rapid movements to catch up, but the coal guys will be trying to catch up, and the intermodal operators will too.

“We will have to work around coal, and hopefully there will be some flexibility there.”

Movement of grain from northern NSW to Newcastle has already been interrupted by several closures of the Narrabri North-Moree line at Bellata, where storm rain in the Bellata district has halted rail movements.

This is ahead of the scheduled shutdown of part of the Narrabri North-Moree line from 1 April until October so that track can be replaced to meet specifications for the Inland Rail project.

“We’ve been losing Bellata on and off for the past couple of months.” Storm rain has caused temporary closures of the line through Bellata ahead of its scheduled shutdown next month. Photo: ARTC

While NSW has plenty of other rail paths carrying grain towards port, Mr Cox said working around rain disruptions and other rail operators was a challenge, particularly now that the grain line into Newcastle has closed.

“The hard part is trying to find a path which meets a port slot.”

Newcastle is the world’s biggest coal-export port, and the rail line which feeds it also carries grain.

The flood-affected part of the line is only a few kilometres from the port terminus, and on flat ground.

While some ballast may have washed from under the line, it is expected to be easy to repair once it can be safely accessed.

Complicating matters is the forecast for further heavy rain today and tomorrow in Newcastle and surround areas, and big tides.

While the flooding is causing some short-term headaches for the grain industry, Mr Cox said it was bolstering prospects for the next grain crop ahead of planting.

It is also expected to decimate numbers of mice, which are in plague proportion in parts of inland NSW.

The Mid North Coast of NSW and western Sydney are being hardest hit by the floods, where residential and rural areas are being evacuated and livestock are being moved to higher ground.