The upside of a rain front moving across eastern Australia over the next few days is the likelihood of it triggering a surge in summer crop plantings. (Photo: Mick Humphries, Moree)

A RAIN front moving across eastern Australia has forced a halt to the early stages of winter crop harvest in southern Queensland, but is good news for farmers waiting for a moisture trigger to fire up summer crop plantings.

On the Darling Downs where the first of the barley crops have been taken off in recent days, the rain front has brought patchy falls to much of the area and is likely to produce heavier showers and storms over the next couple of days. 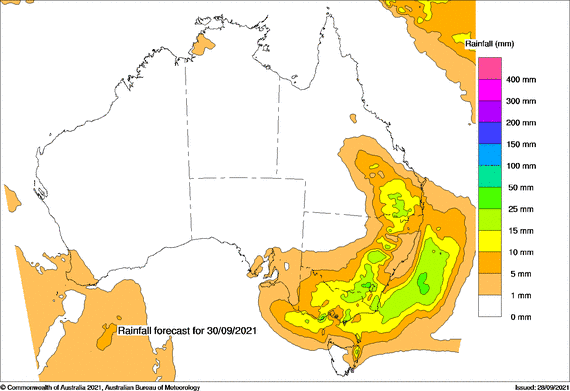 AgForce grains president, Brendan Taylor, said the rain over the past 24 hours had already brought winter crop harvest to a halt in some areas on the Downs.

“The early indications have been very promising from the barley that has come off in the last couple of days. But we’ve had a rain interruption already,” he said.

“There are concerns about some of the barley that lodged badly a while ago because it is already close to the ground. Hopefully if we get bigger falls of rain it doesn’t put it down any more. It is all a waiting game.

“There are still some later winter crops that would benefit from rain because the dry spell through August and September has taken some of the cream off some of those later-planted crops.

“After this rain it looks like the temperatures will go to 31 and 32 degrees so, depending on how much rain we get, a couple of dry days will dry things out fairly quickly.”

Mr Taylor said it was the time of year when farmers wanted rain to get the summer crop going but dry conditions to get the winter crop harvested.

“Some of these winter crops are substantial and everyone is champing at the bit to get them in the bin,” he said.

“There is some summer crop that has been planted in the past month or more that desperately wants rain to get it up and growing. A lot more will be planted once it rains and is wet enough.”

Mr Taylor said in Central Queensland (CQ) which had borne the brunt of a dry growing season, winter crop harvest had been underway for the past few weeks.

He said CQ farmers were desperately waiting for rain to lift prospects for the summer crop.

“They had a far drier run than the southern areas throughout the year. Their irrigation dams are very low. So, there are plenty of places for water to go, but we would like to see the grain harvest out of the road before it gets properly wet,” he said.

Elders agronomist at Dalby on the Darling Downs, Jordan McDonald, said the rain had forced a temporary halt to the barley harvest in a year when barley was likely to outyield wheat.

He said mice and frost had been an issue on some farms, but not enough to cause significant yield losses.

Mr McDonald said the upside of the rain was that it would kick along early-sown summer crops and prompt a substantial summer crop planting.

“There is only a small amount of summer crop in so far. It is not looking great and has a patchy strike, but that will change if we get this rain,” he said.

“It will mainly be sorghum that will go in, then mungbeans as late plant. Dryland cotton will be up this year because of the price.”