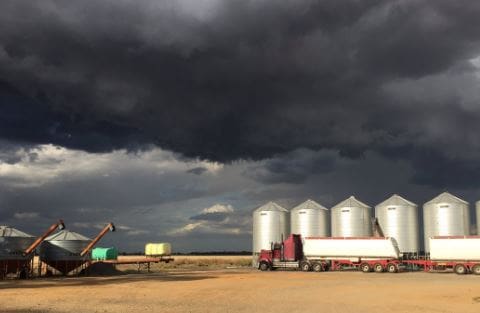 WIDESPREAD rain across Australia’s cropping regions during the past week has shored up this season’s winter crop prospects, locking in the potential for the best national crop since 2016.

Western Australia’s central and southern farming regions received falls earlier in the week of 10 to 25 millimetres, with some as high as 50-100mm in the far southern districts. Further rain fell across much of the WA wheatbelt last night with up to 50mm in some areas, although the Esperance region largely missed out.

Throughout the southern and eastern states, similar falls were recorded later last week, topping up soil moisture profiles for croppers who are having their best season in two to three years after long-running drought.

“The crops were looking very good and we had been putting out urea in the hope that what the Bureau was predicting was going to come. We were getting nervous that the crops were growing so well and needed a rain,” he said.

“Now it is looking fantastic and we are optimistic there will be follow up rains. They are already talking about some for this week which would really put the season right on track.

“The people who have livestock have also got feed.”

Mr Ferrier said growers had sown a mix of cereals, oilseeds and pulses, plus some vetch for hay.

He said there was a significant planting of canola because growers had had subsoil moisture and were looking for diversity in their cropping programs.

AMPS Agribusiness consulting agronomist at Moree in north west New South Wales, Tony Lockrey, said there had been falls of 14-35mm across the district.

“It has been very gratefully received and will arrest the slide in potential yield and hopefully correct a few losses from frost last Thursday,” he said.

“Farmers have had a busy week with fertiliser and fungicide applications again, and hopefully some decent follow-up rain this week will bring the early crop home at average to above average yields.”

In Queensland, AgForce grains president, Brendan Taylor, said the best rain was around Roma where there were registrations of around 25mm and even bigger falls further west.

To the east, the cropping areas of the Darling Downs received useful falls of 10 to 15mm.

“It was particularly useful coming only a week to 10 days after the last fall. The changes (rain fronts) are getting closer together. They were a fortnight apart, and now there is another one forecast for this weekend coming,” he said.

“There is variability in the maturity of the crops. Some of the earliest crops that were deep planted are out in head and should be increasing in yield. The later planted crops are going to get their secondary roots established now and really start to grow. It is all positive.”

Looking ahead, Mr Taylor said there were improving prospects for an early summer crop planting if the rains kept coming.

“It wouldn’t surprise me if there is possibly some corn already planted on some areas of the Downs. It certainly brings an early sorghum plant in September into the picture if it’s warm enough and keeps raining,” he said.

“There are some places where there was no winter crop planted at all, so they will be the ones thinking about an early summer crop, providing it is wet enough.”