THE COLLAPSE of chicken processor, Red Lea, has forced its 30 NSW poultry producers to seek new supply agreements, and is expected to cost Ridley Corporation up to $7 million as it looks for a new source of raw material for its Maroota mill. 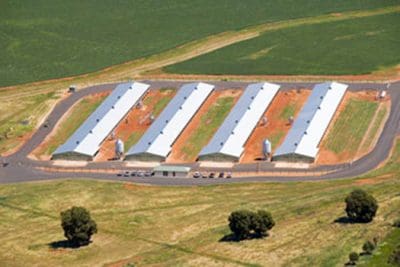 Following months of speculation about Red Lea’s worsening terms of trade, the Sydney-based company went into voluntary administration with McGrath Nicol on 29 March.

This move has made redundant Red Lea’s 400 workers in total at its seven company-owned Sydney stores, and its Blacktown plant, which was capable of processing up to 500,000 birds per week.

“They owe growers $6 million and towards the end, Red Lea would have been lucky to be doing 250,000 birds a week and supplying about 3-4 per cent of the NSW market,” NSW Farmers’ Association poultry officer, Ray Lee, said.

“We’ve been working with other processors like Baiada, Cordina and Pepe’s to find other homes for the birds these poultry farmers are producing, and I can’t speak highly enough of the cooperation they’ve given us.”

Ridley said it expected the future of the Red Lea plant to “take some time to determine”.

“It is Ridley’s current assumption that there is unlikely to be any further supply in the fourth quarter of this financial year,” the company said in an announcement to the Australian Stock Exchange.

Ridley has estimated the full year-on-year impact of the reduction and subsequent loss of the raw material from Red Lea to cost between $6 million and $7 million of earnings, of which about 30pc was incurred in its first-half year result.

“This estimate is a combination of the reduction and subsequent loss of Red Lea raw material supply plus all the related follow-on supply chain, processing costs and overhead recovery ramifications for the Maroota site.”

Ridley said it was reducing processing shifts at Maroota, in Sydney’s northwest, to reflect the cut in volume caused in the short term by the Red Lea closure until it could replace input with material made from mackerel, spent hens or stabilised raw material.

Red Lea sourced feed from Ingham’s to supply its poultry producers, and was not an independent feed miller.

The next meeting of Red Lea creditors is set for 14 May, and is expected to announce a wind-down strategy for the company.

Red Lea operated through a further 22 franchised stores, and these could continue as rebadged independent retailers.

The company was founded at Blacktown in 1957 by the Velcich family, and in 2015 sold to the Asif family for $30 million.

It had breeding farms at Cooranbong, Mandalong, Menangle, Tamworth and Wellington, and its broiler producers were mostly located within 150 kilometres of Red Lea’s Blacktown plant.

By late 2017, Red Lea was believed to have accumulated a trading loss of $17m.

The Asif family is connected with Jakarta-based company Royal Industries, which owns palm plantations, palm-oil facilities and shipping and timber interests in Indonesia, and textile, jute, and rice mills in Pakistan.