Reforms ahead in agriculture’s approach to R&D

FEDERAL agriculture minister Senator Bridget McKenzie yesterday announced the formation of an advisory body to provide options on reform opportunities for agriculture’s research and development system, as part of a drive to ‘modernise innovation.’ 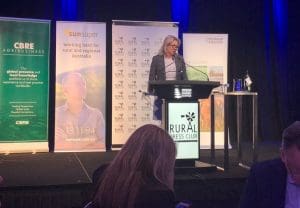 Speaking at the Rural Press Club of Queensland event in in Brisbane, Sen McKenzie said the R&D system needed to evolve to better focus on delivering benefits to producers and to enable the industry to jump ahead of global competitors.

The new advisory body would activate early next year.

“We’re spending too much time on short-term priorities and on the concerns of individual sectors,” she told the Press Club audience.

Sen McKenzie said she would make specific announcements about the R&D reform roadmap in coming weeks, including the release of a discussion paper to guide engagement on September 23.

“I am committed to this process to be inclusive and ensure that all who have a stake in agriculture have a say on the future of our innovation system,” she said.

Under current arrangements, each year Australian farmers and graziers, through their levies, invested almost $500 million in R&D and marketing. The Australian government provided matching funding of $300 million for eligible R&D expenditure, to Australia’s 15 Rural Research and Development Corporations.

Speaking to stakeholders in Tasmania recently, Sen McKenzie said the agriculture sector had had the current system of R&D for four decades, and while it was a world-class system in the partnership between the tax-payer and the levy-payer, it was not really delivering back to the farmgate.

“We need collaboration, sharing and making sure we can then spend the money we save from stopping duplication on other things. So watch this space,” she said.

Sen McKenzie told yesterday’s Rural Press Club audience that for agriculture to reach its $100 billion value target, it needed to be ‘clever and courageous.’

“We need an innovation system that supports farmer productivity and profitability right across the food and fibre supply chain… while ensuring that our research delivers value for our tax payers and our levy payers.”

While there was no doubt that the systems behind agriculture’s R&D corporations were world-leading when they were created decades ago – agricultural productivity growth was slowing, and had been since the mid-1990s.

“The rural R&D system needs to evolve to better focus on delivering benefits to producers, and to enable the industry to jump ahead of global competitors,” she said.

Quoting from the EY Agricultural Innovation – A national approach to growing Australia’s Future report, Sen McKenzie said Australia’s rural innovation system was ranked 20 in the world. Tellingly, 80pc of the 550 stakeholders interviewed for the EY report wanted reform – and this had been Sen McKenzie’s own experience when travelling around and talking with stakeholders.

She said the sector needed to consider all options when looking at innovation funding.

One theoretical policy option was to let the market decide how much is invested in R&D – taking the public investment out altogether – which many countries overseas had done. Another option proposed by Labor was to reduce taxpayer contributions.

“While they are both valid approaches, they are not supported by our government. We remain fully committed to maintaining this long-standing public/private partnership, between taxpayer and levy payer,” she said.

Sen McKenzie said a range of views had already been expressed about the possible future shape of the R&D model. Some were structural, suggesting fewer or more RDCs. Other issues were about governance in delivering real benefits for levy payers, and the complexity of producers paying multiple levies to different bodies, on top of their state farm organisations and commodity advocacy groups.

“There are many different ideas for reform. But we need to be open and constructive about a future state that will put the investments of levy payers and the government to best use,” she said.

“My challenge to all is to leave vested interests behind and work in the national interest for a reform that will put us in the best position for the 21st century.”