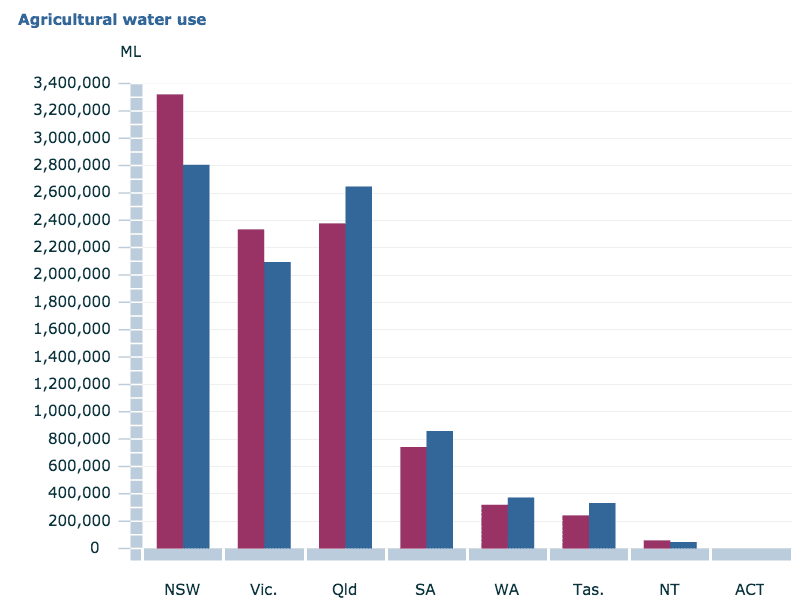 Differences in regional climatic conditions appear to be influencing the use of water on Australian farms, according to Agricultural Census data released by the Australian Bureau of Statistics (ABS) today.

ABS Director of Environment and Agriculture Statistics, Lauren Binns said farmers were modifying their practices to adjust to water availability and climatic conditions.

“This includes selling off allocations to recoup costs rather than cropping in a bad year, watering larger areas less, or changing crops planted.

“The above average temperatures and dry conditions in southern Australia through 2015-16, along with record high prices for water, were critical factors in water use for Victoria and South Australia in particular.

“The Agricultural Census data showed that while the total volume of water used in 2015-16 decreased by 3 per cent to 9,157,291 megalitres, the total area watered across Australia increased by 4 per cent to 2,147,915 hectares,” Ms Binns said.

Across Australia, the Agricultural Census surveyed around 104,000 agricultural businesses. It is the ABS’ largest business collection and one of the major sources of information about the Australian agricultural industry.

The ABS greatly appreciates the support of the agricultural sector in supplying this data and our government and industry partners for their input to the production of these statistics.

Source: ABS. Further details are available in the ABS water use report here