SENTIMENT in the nation’s agricultural sector is at a 15-month low as Australia’s farmers brace for a hot, dry summer with drought conditions intensifying across large swathes of the country, the latest quarterly Rabobank Rural Confidence Survey has found. The driest spring on record – along with bushfires which heralded an early start to summer – saw the latest survey report the sixth-lowest reading in its 18-year history, with two-in-five farmers expecting conditions in the agricultural economy to deteriorate even further in the coming year.

However, rural confidence remains considerably higher than at the height of previous significant droughts.

Confidence this survey was down across all commodity sectors and states, except Queensland where it remained subdued.

The final survey for 2019, released today, found of the 1000 farmers questioned, 41 per cent expect agricultural economic conditions to worsen in the next 12 months (up from 30pc in the September quarter), while 31pc expect them to stay the same.

Only 17pc had a positive outlook on the year ahead, compared with 25pc in the previous survey.

Rabobank Australia chief executive officer Peter Knoblanche said as the year draws to a close, there had been little respite in the unrelenting dry across much of the eastern seaboard.

Dry conditions now extended across the country to the west and the nation has endured its driest January to November period since 1902.

And with little relief foreseen – with the Bureau of Meteorology forecasting a warmer and drier-than-average summer – Mr Knoblanche said the season was understandably on most farmers’ minds as fires, heat and wind foreshadowed “a long summer ahead”.

“The survey, which was completed in November, found drought concerns were particularly heightened in New South Wales, with 99 per cent of farmers who had a negative outlook blaming the season for their pessimism,” he said.

“But concerns about weather spread across all states, with drought emerging as the primary reason nationally for farmers expecting economic conditions to worsen in the year ahead.”

Mr Knoblanche said while rainfall deficiencies were being felt across much of the country, seasonal conditions were comparatively favourable in the far south of the country and parts of Queensland.

“Farmers in southern Victoria and northern Tasmania were buoyed by late-spring rains, while those in Queensland’s Channel Country region are experiencing good pasture growth as flood waters make their way through the area,” he said.

In Western Australia, Mr Knoblanche said, earlier-season hopes for the state’s crop had been dashed, with a warmer-than-usual spring, coupled with below-average rainfall and a catastrophic frost in south-eastern WA, expected to result in a crop around two thirds of last year.

It was also a disappointing end to the cropping season in South Australia.

The fundamentals of the agri sector however remained solid, with strong demand and solid prices for many commodities – such as beef, sheepmeat, wool, dairy, grains and cotton.

Mr Knoblanche noted that rural confidence had been at considerably lower levels in 2002 and 2006, at the height of previous significant droughts. 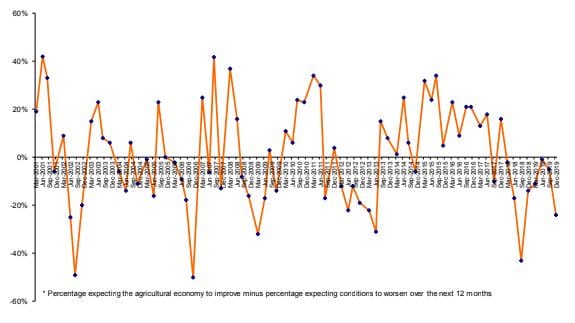 Confidence was down across all states, except Queensland where it remained relatively steady, albeit subdued.

Farmers in New South Wales were the most pessimistic about their prospects, Mr Knoblanche said, with 99.9pc of the state now in drought.

“Despite some parts of NSW, such as Bourke in the far west, recently receiving their best rain in years, it was far from drought-breaking,” he said.

“Some rain had also since reached drought-stricken areas in northern NSW and the New England, but the overall dry conditions there are largely unprecedented.”

In Queensland, Mr Knoblanche said, sentiment remained relatively unchanged despite one of the worst droughts on record, reflecting just how long – up to seven years in parts – farmers had been enduring drought.

“The hot, dry spring in Western and South Australia has taken its toll on farmer sentiment there, but despite the disappointment, it has done little to dent longer-term optimism – with investment intentions in both states well and truly outstripping the other parts of Australia.”

Meanwhile, he said seasonal concerns earlier in the quarter had impacted Victoria and Tasmania with confidence dropping sharply in both states, however conditions had since been alleviated with late-spring rains in southern Victoria and northern Tasmania – although it remains dry elsewhere.

Sentiment took a knock across all surveyed commodity sectors, with confidence at its lowest level in more than a year in most sectors, while in cotton, it had foundered to a six-year low.

“Given the season, with little-to-no water allocation across all cotton-growing regions and no significant moisture profile for dryland plantings, it is no surprise confidence has fallen away significantly in the cotton sector,” Mr Knoblanche said.

Alongside cotton, confidence in sugar was also lagging the other sectors, he said, with a below-average local cane harvest and prices remaining supressed by India’s export program and heavy Asian stocks.

In dairy, after reporting a strong rally in confidence last quarter, sentiment retreated back to levels reported throughout much of 2018.

“Farmers in the southern dairy regions are in a better position to capitalise on record-high milk prices, but conditions remain extremely challenging for those in other regions where margins are being eroded by high water and feed costs.”

In the grains sector, sentiment was down in all states, Mr Knoblanche said, as frost and heat in the west, and hot and dry conditions in the east, took their toll on the nation’s winter crop.

“Conditions were tough from the outset with below-average soil moisture in many cropping regions,” he said, “but with little reprieve throughout the season with ongoing dry weather, heat and frost, we are looking at the smallest crop in over a decade.”

Confidence also fell back among livestock producers, largely due to the season.

The survey showed that of those livestock farmers with a negative view of the 12 months ahead, 98pc of beef producers and 94pc sheep producers cited drought as the main reason for their pessimistic outlook.

“Prices remain very strong for beef and sheepmeat and there is considerable upside when seasons improve, given livestock numbers are at their lowest level in over two decades,” Mr Knoblanche said.

“But the drop in confidence indicates the frustration many producers are facing that they simply don’t have the stock – or are trying to hold on to their core breeders – to take advantage of the high prices.”

Farmers overall reported an easing in near-term investment intentions this quarter, Mr Knoblanche said, with 19pc reporting they would reduce their on-farm investment in the next 12 months (up from 14pc last quarter).

A total of 17pc cent however, were still intending to increase investment (same reading as last quarter).

Investment intentions varied considerably by region, however – with more farmers in drought-impacted NSW and Queensland indicating they would be winding back their investment, while intentions remained comparatively strong in WA, SA, Tasmania and Victoria.

“Understandably, after multiple dry years in many regions, near-term investment intentions are starting to be impacted,” Mr Knoblanche said.

“This is not uncommon during severe droughts and, to some extent, the most remarkable fact is that the impact on investment plans has been so modest.”

In terms of income projections, the nation’s farmers revised down expectations for their gross farm incomes in 2020, compared with 2019, albeit not to the same extent as the drop-off in farmer sentiment.

Across the country, 23pc of surveyed farmers are expecting an improvement in gross farm incomes (was 24pc), while the percentage expecting a weaker financial result increased slightly to 39pc (from 34pc).  And a total of 34pc expect little change in incomes from this year.