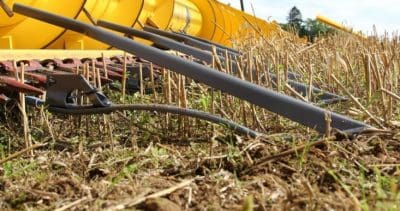 Supplies are selling out fast for crop lifters to help pick up this season’s heavy, lodged crops. Photo: Schumacher.

The widespread heavy rains of winter and early spring have produced tall, heavy crops that have either already lodged in areas hit by wet, wild weather or are at risk of falling over in coming weeks in the lead up to harvest.

“Normally we would only be starting to sell crop lifters at this time of the year, but already we have sold out our entire stock,” he said.

“We had an initial order from Germany that has been sold out; we then air-freighted in an order which we have also sold out; and we have since contacted the company and are taking all their stock which is being air-freighted in this week. That is already 95 per cent sold.

“If there are people still looking for crop lifters they are going to have to search high and low because there are few people with any left.”

Mr Schmid said the need for crop lifters was particularly high this year throughout South Australia, southern Victoria and southern NSW where there had been an extremely wet year.

“I would say most of the crops in the regions that have had heavy rains will be harvested with crop lifters,” he said.

“Having said that, we are based in Freeling in SA’s mid north and I am surprised how the local crops have stood up very well despite the amount of rain. They are still green and still have a lot of flex in the stem.

“A month later when they start to brown off, if they go down they don’t come back up again.”

It is a similar story for Riverina supplier, Hutcheon and Pearce, whose group parts manager, Vin Leary, Wagga Wagga, NSW, said farmers would be looking for ways to lift the many crops that had gone down, or were at risk of falling over, this season.

“The crops are so heavy. They are very tall crops and it won’t take much for them to fall over. Once they fall over the only way you are going to get them up is with crop lifters,” he said.

“I think the supply of crop lifters is going to be a problem later on. If it was me looking for some, I’d be out there now looking for them because I know that later down the track they are going to get short.”

Neil’s Parts parts interpreter, Dan Stapleton, Toowoomba, Qld, said it had been one of the biggest years for demand for crop lifters and stocks were dwindling quickly.