AUSTRALIA’S second annual National Agriculture Day is drawing support from all sectors of the rural sector today to help brings its message of food and fibre production to those who work outside the industry.

This year, the day carries with it the #GrowForGood and #NationalAgDay hashtags, which are being picked up by cropping, livestock, horticultural and service industries across social media, and boosting awareness in cities and towns of agriculture’s importance.

“Farmers across the state, and indeed many parts of the country, are making tough decisions every day as this drought continues.

“They are decisions that impact farmers and their local communities financially but also physically, mentally and emotionally.

Mr Jackson said National Ag Day also gave a chance for the rural sector to give thanks for the support it has received during the drought.

“The community’s support no doubt is playing a vital role in helping farmers get through this tough period.

“The generosity Australians have shown drought affected farmers has been overwhelming and the farming community is very grateful,” Mr Jackson said.

NSW Farmers’ Association said National Ag Day gave the rural sector a chance to recognise growing global demand for food and fibre, with latest figures from the NSW Government showing that prior to drought, the state’s exports had grown by 22 per cent year on year to $6.3 billion.

“We often take for granted being able to buy a box of cherries at the local markets, or top- quality lamb, pork or beef for the Sunday roast but that’s not the case for millions of people across the world, and now more than ever we’re seeing countries, like China, with a growing middle-class showing great interest in our clean and green food.”

In Queensland, AgForce general president, Georgie Somerset, said while many Queensland communities were still dealing with drought, National AgDay was an opportunity to celebrate and highlight how agriculture makes the world a better place.

“Whether it’s helping feed more people, caring for our environment, or creating jobs in regional and remote communities, every day our farmers #GrowforGood – and that’s the theme of today’s celebrations,” Ms Somerset said. 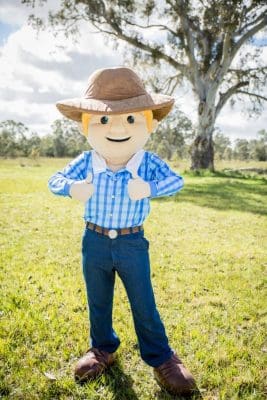 “Every Australian farmer feeds 200 Australians and 400 people overseas, and with the global population set to reach nine billion by 2050, farmers will need to grow more and do it sustainably.

“With Queensland producing almost a quarter of Australia’s food and fibre and our exports valued at around $10 billion a year, our local farmers will play a big part in feeding and clothing a growing world.”

National Agriculture Day is part of the National Farmers’ Federation’s online AustralianFarmers presence, and its ambassador is George the Farmer.

“We’ll be shouting from the rooftops about how agriculture makes the world a little bit better every day by improving the health of our communities and our planet,” the AustralianFarmers website stated.