AUSTRALIAN biosecurity officers intercepted more than 350,000 items of biosecurity concern across the country in 2018, with approximately 60,000 items sniffed out by biosecurity detector dogs. 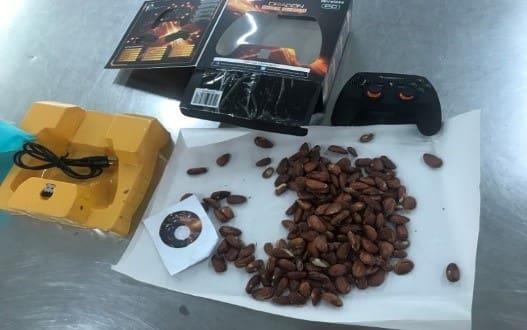 Seed concealed in a gaming control were among the many items intercepted by Australian biosecurity officers in 2018..

“2018 was a huge year for the department with a number of notable interceptions, the opening of two new international airports in Avalon and Newcastle and a range of other important biosecurity activities,” Ms O’Connell said.

“Across the major international airports we intercepted more than 100,000 biosecurity risk items in Sydney, close to 60,000 items in Melbourne and 43,000 in Perth. A live squirrel was one of the more unusual items picked up by biosecurity officers at the border in 2018.

“Significant airport interceptions included two live squirrels, an NBL player’s French bulldog and citrus budwood that was found to be carrying one of the world’s worst citrus diseases.

Ms O’Connell said biosecurity was everyone’s responsibility and these interceptions highlighted the importance of following the regulations and not bringing or sending risk items to Australia.

In 2018, a number of enforcement cases were prosecuted, with companies and individuals facing court on serious charges relating to biosecurity breaches.

This includes two separate cases relating to illegal imports of pig semen and exotic fish. A company and its director were also fined $120,000 for breaches relating to imported pig meat.