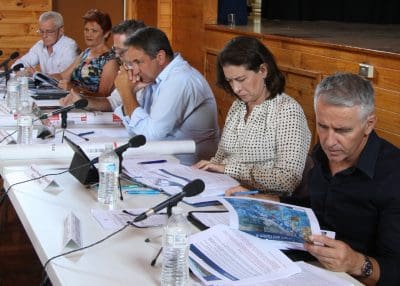 THE PROPOSED route for Inland Rail has drawn a deluge of criticism from landholders on the Condamine and Macintyre floodplains in southern Queensland and the New South Wales/Qld border region.

On Wednesday, those criticisms were voiced at a public hearing at Millmerran, held before the Federal Government’s Rural and Regional Affairs and Transport References Committee.

Made up of senators Anthony Chisholm, Pauline Hanson, Susan McDonald, Gerard Rennick and Malcolm Roberts, all from Queensland, and chaired by Glenn Sterle from Western Australia, it held its second hearing day in Brisbane yesterday.

Key concerns are centred around a perceived lack of understanding from the Australian Rail Track Corporation (ARTC) about the impact of building a greenfield rail line on the deep alluvial soils on both floodplains, and the communities and livelihoods they support.

The committee has until 30 September to write a report on Management of the Inland Rail project by the ARTC and the Commonwealth Government.

It has already received a number of written submissions, and on Wednesday heard from representatives from the Goondiwindi Shire Council (GSC), farmers, consultants, and one of Australia’s biggest poultry farmers, D A Hall & Co.

Based at Millmerran, D.A. Hall & Co employs more than 350 people and has 2 million hens which supply around 10 per cent of Australia’s eggs.

It produces around 80,000 tonnes of feed per year at its feedmill, and sources inputs mainly from local growers.

Chief operating officer Adam Birch was one of three D.A. Hall & Co staff who presented to the committee.

He said around one third of the company’s 12,000 hectares of farmland could be affected by Inland Rail infrastructure. 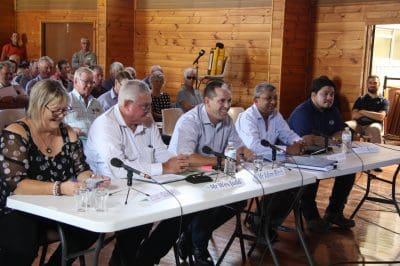 Mr Birch said uncertainty about its route was impacting the company’s plans for expansion.

“There are seven different lines that could bisect our business,” he said.

“We have been asked to pick which one would be the most suitable.

“Our business is to produce the cheapest form of protein in the country, not produce lines on maps.”

Mr Birch said if the modelling used to engineer the Inland Rail line underestimated maximum water levels by as little as 400 millimetres, the impact on the company during a flood would be “catastrophic”.

Brisbane-based water-resources engineer Sharmil Markar has been engaged by the Millmerran Rail Group and D.A. Hall & Co to look at impact Inland Rail will have on the district.

“We’ve been paying Sharmil to mark the homework of ARTC,” Mr Birch said.

This drew an impassioned response from Senator McDonald.

“I am ashamed that you have had to pay a consultant, an expert, to do the government’s work,” Senator McDonald told the Hall’s employees presenting alongside Dr Markar.

“It is shocking and it’s embarrassing. I can tell you, having been out here for some of your floods for cattle work, it is unacceptable that we don’t engineer properly across a floodplain.

“You can be sure that you have strong advocates in the government that will ensure that the bureaucrats do their job, which is listen and respond to the expert testimony.” Some farms fronting the Gore Highway at Pampas near Millmerran are hosting visual reminders of peak flood levels and the dangers they pose to the proposed Inland Rail route.

Dr Markar was one of several presenters on Wednesday to highlight ARTC’s use of a one in 100-year peak flood level in its modelling which was below the height recorded in the 2010 flood.

“Before we look at the design and the impacts of the design on flooding, you have to get the base case right,” Dr Markar said.

“I don’t believe they have got it right yet.”

The proposed ARTC route for the NSW-Queensland-to-Gowrie section includes 16 kilometres across the Condamine floodplain.

Pampas farmer Ross Harris told the hearing the Condamine floods every 10 years, with the most recent major flood in 2010-11, and a minor one in 2015.

ARTC’s current proposal includes hundreds of culverts, which landholders and soil-conservation specialists believe will cause erosion, harbour debris build-up, and disrupt the flow of water over the floodplain.

Most who presented to Wednesday’s hearing would prefer Inland Rail be rerouted a few kilometres south through lighter country above the floodplain, while others prefer a route which heads north of Millmerran to Cecil Plains, again above the floodplain.

Dr Loch explained soils on the Condamine floodplain where the Inland Rail route has been proposed were high in smectite clay which, when the soil is wetted, becomes very light and will move easily in a flood.

“Our soils are fragile and unique; the soils are very erodible,” Dr Loch said.

“The standard engineering guidelines, much of which come from overseas, do not apply to these soils.

“Any models or design has to consider this.”

Mr Titmarsh was critical of the use of culverts to support the Inland Rail line.

“Culverts concentrate and speed up flows,” he said.

“We need flexibility in structures.”

Mr Titmarsh said while Queensland’s Transport and Main Roads had “got the picture” about minimising the use of culverts on unsuitable ground, Queensland Rail had not, and this had resulted in the closure of some rail lines.

Mr Genrich said flood heights alone were not a suitable metric on which to calculate engineering for infrastructure on the plain, and farming practices and placement of other infrastructure could all affect water flows.

“The only way to deal with a flow, as the mayor of Goondiwindi said, is to have (the Inland Rail line) up on a bridge.

“Sometimes the biggest flows don’t do the most damage.”

Mr Knowles-Jackson said a major infrastructure project like Inland Rail could have an impact up to 40 kilometres downstream in a flood event, and upstream could also be affected.

They made the trip to Millmerran to state their case on Wednesday.

“We don’t have faith in the modelling,” Mr Uebergang told Grain Central. 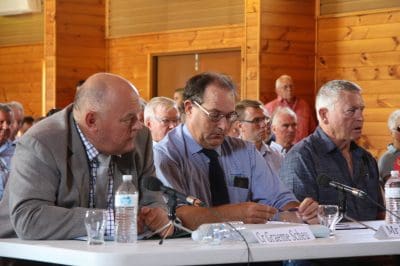 “The decision-making process at ARTC leaves a lot to be desired.”

With regards to the border crossing, Cr Scheu said an open bridge rather than culverts would minimise the flood threat to Goondiwindi, Boggabilla and Toomelah created by ARTC’s current engineering proposal.

“If there was an open bridge, our argument about flooding would be minimal,” Cr Scheu said.

The proposed use of earth banks to support the Inland Rail line on parts of the floodplain has also sparked serious concerns from GSC and others, particularly after 2011, when floodwaters came perilously close to breaching Goondiwindi’s levee banks.

The four NSW farmers and GSC presented in separate sessions, but jointly voiced support for an Inland Rail alignment which crosses Whalan Creek and the Macintyre River close to Boggabilla.

This sits west of ARTC’s proposed option close to the junction of the Dumaresq and Macintyre rivers, and to the Toomelah community.

ARTC appointed Richard Wankmuller as CEO in 2018, and meetings he will be holding next week with some of those addressing this week’s hearing were cause for hopes voiced by presenters on Wednesday.

ARTC’s announcement last year that an expert panel of international specialists was being established to advise on best-practice flood structural integrity and report back to the Queensland and Australian governments was also mentioned by some presenters as a positive.

Inland Rail is a 1700km project which will link Brisbane and Melbourne. The project is being delivered over 17 sections, and Wednesday’s sessions dealt with the two adjacent to the NSW-Queensland border.