Shiploads of southern wheat on the radar for Brisbane

SOUTHERN Queensland’s dry-induced feedgrain deficit is drawing grain from further and further south each week, and some in the trade say a vessel from South Australia or Victoria is close to pricing itself into Brisbane to alleviate metropolitan demand. 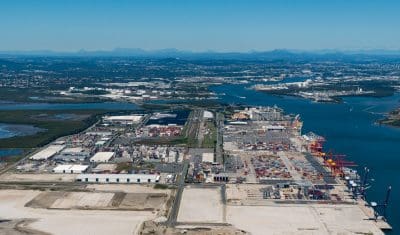 Brisbane can receive bulk grain at two terminals, and traders say one or both is likely to receive wheat from southern states in coming months.

This is likely to supply the Brisbane region’s stockfeed mills which focus on the poultry sector, a major user of ASW-type wheat, and put a lid on rising grain prices delivered seaboard end-user.

Traders in southeastern Australia who spoke with Grain Central said dwindling supplies of grain in Queensland and northern New South Wales had now made wheat a likely contender for shipping up the east coast.

“My gut feeling is we’re close to making wheat work into Brisbane,” one trader said.

“It’s definitely in the hitting zone,” another trader said.

“We’re very nearly at a price where it’s worthwhile to load 10,000 to 15,000 tonnes on to a vessel in Victoria or South Australia and ship it to Brisbane,” a southern trader said.

“We got a quote on sea freight for US$18/t, which is a lot of money when you consider you can get it to China for $16/t, but that’s the price we have to pay to use vessels flying under an Australian flag.”

Shipment of the first cargo is expected to take place in October or November, and more may follow if the disparity widens between the struggling crop in Queensland and northern NSW and the well-watered crop in southern NSW and Victoria.

Traders said Glencore through Viterra’s South Australian ports, GrainCorp as the major port operator in eastern states, Emerald with its Melbourne port, or Wilmar Gavilon with its Queensland Bulk Terminals facility on the Brisbane River, were likely to hear the numbers click first.

“Anyone with a port asset in southeastern Australia has an advantage because they will be able to schedule a vessel more easily, and maybe save a bit on the discharge,” a Queensland trader said.

Traders said stockfeed millers such as poultry producers Inghams and Woodlands, as well as Ridley and Riverina, would likely be the customers for southern Australian wheat coming in via Brisbane ports.

“What it will do is put a cap on that market, but at current values, grain still won’t work on to the Darling Downs; that’s still $20-$30/t away,” the Queensland trader said.

Hauling grain by road from southern NSW remains the best option to get it to the Darling Downs, which is centred around 200 kilometres west of Brisbane.

Traders said wheat and barley at around $300/t delivered to local end-users had been coming from West Wyalong, Lake Cargelligo and Griffith in NSW over the past week or two as supplies in the Dubbo, Parkes and Forbes regions dried up.

Feedlots have been the big buyers of old-crop barley, with concerns about a bolting and low-yielding winter crop, and uncertain prospects for new-crop sorghum brought about by unseasonably hot and dry weather.

“Barley has been working its way up for a few weeks; we’re certainly drifting further south as the drawing arc gets wider,” Robinson Grain trader, Anthony Furse, said.

Dry conditions have some growers anxious about even the conservative tonnages they have forward sold from new-crop.

“Weather over the past two weeks has been harsh, and they are glad they haven’t forward sold any more, even in those safer Southern Downs areas,” Mr Furse said.

Traders said the Brisbane consumptive market for southern wheat was increasingly attractive as an alternative to Australian export markets, where aggressive sales of Black Sea grain were making it hard to sell low-protein cargoes.

“Australian grain needs to be able to find a market into the export pathway, and outside of our traditional buyers, we are struggling to compete against Black Sea.

“Brisbane is a real possibility; it’s a domestic market which in effect becomes an export market.”

Traders said one or two small cargoes of old-crop ASW might make their way into Brisbane, and more of new-crop could be expected if the northern seasons continued to struggle.

“Export prices being paid for old-crop out of Newcastle and Port Kembla are high enough to keep drawing that grain from places like the Liverpool Plains to port, so Brisbane isn’t going to get a look at it.”

A less frenetic domestic demand for old-crop grain had made southern prices softer than northern ones by close to $100/t at times in recent weeks.

“That’s the kind of spread we need to get to to make southern wheat into Brisbane work.”

Grain from as far away as Western Australia, and even overseas, has priced itself into drought-affected Queensland markets in years gone by.

However, shipments from Victoria and South Australia are more common once it becomes cheaper to pull grain out of warehousing at a southeastern port and put it on a ship instead of trucking it up the Newell Highway.

According to a JCS Solutions report for Australia’s Feed Grain Partnership, southern Queensland, which includes the Brisbane region and the Darling Downs, is Australia’s biggest feedgrain user.

In 2014, grain use from the poultry sector in southern Queensland accounted for 750,000t, with wheat and sorghum being its preferred grains.